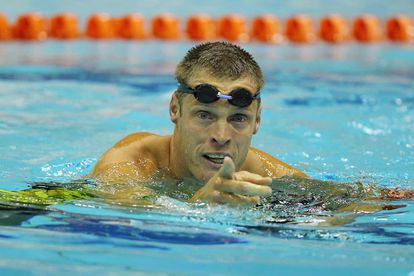 An incident on a stretch of highway in Gauteng has upset the online community of South Africa, after a video of this unpleasant road rage altercation went viral on social media. Terence Parkin has represented South African in two Olympics, previously winning a silver medal in the 200m. But he was shown no respect here.

Parkin is a much-loved figure in our world of sports. He has overcome incredible adveristy to become a household name in the pool. As a deaf person, he has managed to scale many fences to create his legacy. But sadly, he may now be remembered for this bruising exchange.

A BMW can be seen pulling out in front of Terence Parkin, as recorded by the athlete’s dashcam. The reckless driver completely cuts off the swimmer, and the pair end up bumping each other. Further down the road, the irate BMW driver is waiting for Parkin and flags him over.

He shouts at the Olympian, saying that he “needs to see a doctor”. Terence Parkin turns the dashcam towards the aggressor, before signing to the camera that the man doesn’t know he’s deaf. However, the bloke soon catches on, and erupts in a fit of road rage.

There’s a physical scuffle – and Parkin drops his camera while capturing the incident – but when he resumes filming, the Global Brand Ambassador for the Deaf and Blind is seen with a bloodied nose and a laceration to the face. He even sports a burst blood vessel in his eye from the attack.

SANCO have taken it upon themselves to find the man who is accused of assaulting Terence Parkin:

One of our most celebrated athlete, @TerenceParkin was assaulted by this horrible human being!

Parkin won his silver medal at the Sydney Olympics in 2000. He’s also won events in the Deaflypics Games, competing in his preferred 200m breastroke event. Despite his competitive nature in the water, his friends have described him as a “placid and peace-loving individual”.

A series of videos have been removed from Facebook, which document Terence Parkin’s nasty run-in with this enraged road-user. It showed the apparent assault taking place, as well as the immediate aftermath. Should they resurface online, we’ll be sure to feature them in this article.