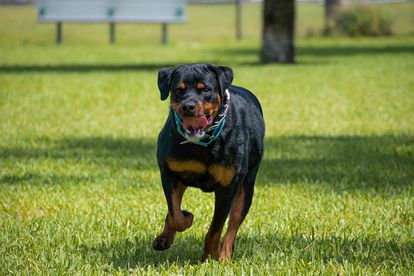 The Rottweilers allegedly broke free while the Mayor was out of town – Photo: Pixabay

The Rottweilers allegedly broke free while the Mayor was out of town – Photo: Pixabay

A 37-year-old male in the up-market town of Kenton-On-Sea was allegedly ravaged to death by two Rottweilers last weekend – and the dogs belong to Ndlambe Municipality Mayor, Khululwa Ncamiso.

Just a few days ago, it’s understood that the Mayor and her household had left the dogs overnight, while they embarked on a trip out of town. However, local reports claim that the canines broke free, and started roaming the streets.

Khayalethu Bulo, who was in the vicinity of Northwood Street when the confrontation took place, ended up getting mauled by the vicious animals – leaving him with injuries that would cost him his life.

Locals complained about Rottweilers before

The savagery of the attack has not been lost on the police. Although they are holding an inquiry into the matter, it’s understood that Khululwa Ncamiso could still face criminal charges for this tragic outcome.

One local resident took to Twitter after the incident, sharing their knowledge of what went down…

It is so tragic to say the dogs of Ndlambe Municipality Mayor have ravaged and killed one of our community members whom they met attacked and torn to death about 2 km away from their home in the earliest hours of yesterday morning. Those are of the Rottweiler hybrids

@eNCA we need you at Kenton-on-Sea the dogs of The Mayor of Ndlambe Municipality has ravaged and killed the member in our Community they are Rottweiler. She breeds them

Breeding of Rottweilers comes under the spotlight

Both dogs are now with the SPCA, and the ongoing inquiry will look to ascertain how exactly these Rottweilers were able to wander out of their home and onto the streets.

What is more, Mayor Ncamiso is also a breeder of these dogs. Rottweilers are well-known for their ferocious nature, and end up being the ‘guard dogs of choice’ for many people looking to protect their properties. However, on this occasion, there was no known element of ‘self defence’ involved.