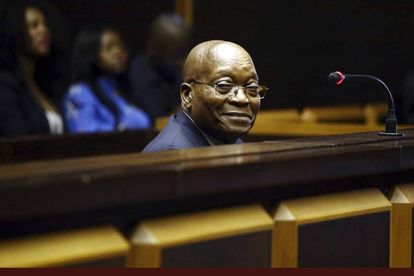 As many of us now know, former president Jacob Zuma is being held at the Estcourt Correctional Facility since Wednesday night. Just a few hours after his arrest, Minister of Justice and Correctional Services Ronald Lamola held a press briefing outside the prison and spoke about the possibility of parole.

WHEN WILL ZUMA BE ELIGIBLE FOR PAROLE?

So while Zuma was expected to serve 15 months, Lamola said he will be eligible for parole after serving a quarter of his sentence.

“It should be noted that in terms of Section 73 (6 A) of the Correctional Services Act, an offender serving a determinate or cumulative sentence of not more than 24 months, may not be placed on parole or day parole until such offender has served either the stipulated non-parole period or if no non-parole period was stipulated, a quarter of the sentence,” Lamola said.

In this case, there is no stipulation for the non-parole period, this effectively means that Zuma will be eligible for parole once a quarter of his sentence has been served which translates to roughly four months.

“We want to assure all South Africans that Former President Zuma will be afforded dignity throughout his term of incarceration,” he said.

WHAT NEXT FOR THE FORMER PRESIDENT?

As a precaution and in line with COVID-19 measures, Zuma will be placed in isolation for a period of 14 days.

Furthermore, he will be assessed by the Medical Team in conjunction with the South African health military service and this will determine the conditions of his incarceration.

“This assessment is done to determine the major risks and needs of the offender. A complete profile report will then be submitted with recommendations to the Case Management Committee,” said Lamola.

“This process will assist to determine the appropriate classification of the former president.  All of these systems are in place to ensure that incarceration is done in a manner which is not retributive, but humane,” he added.

Lamola added that he saw Zuma and said he was in good spirits.

“He has taken his breakfast and medication. I also told him I will tell the nation and he said the nation must know. He looks well and fine and I hope the health services will continue to deal with his health issues to make sure his health needs are attended to,” he said.

When asked if he would be given preferential treatment, Lamola said no. He said he would be treated like any other offender and if they wanted to give him special treatment, they would have put him up in a hotel.