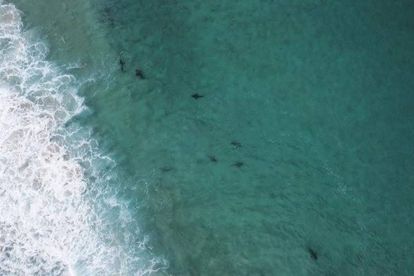 People frequenting some of the most popular beaches in Cape Town have once again been told to evacuate the water on Tuesday, marking the fourth day in a row that the alert has been raised. Surfers, swimmers, and casual paddlers in Muizenberg and False Bay have been cleared due to the continued presence of sharks in the region.

Over the long weekend, beaches have flown the red flag and people have been ushered out of the seas. The shark spotting team have described this increase in sightings as a ‘unique phenomenon’ for the region…

Up to 15 bronze whalers are thought to be cruising around the Kogel Bay region, and frequenting the caves nearby. This flurry of activity has been diligently noted, much to the annoyance of anyone hoping to catch a few waves near Cape Town:

Meanwhile, a warning has been issued for drone pilots, beach visitors, and recreational fishermen looking to make the most of these ‘special circumstances’. The spotting team says that they have never before witnessed shark activity like this in False Bay – and those looking to get close to the bronze whaler pack should instead ‘leave them in peace’:

“We have consistently had between 7 to 15 bronze whalers hanging around in a small area close to shore since March 12th. Of concern, we have noted that the sharks have not only attracted excited shark spotters, but also recreational drone anglers who were seen targeting the bronze whaler shark aggregation last week.”

“This aggregation of bronze whalers is a very unique and special natural phenomenon, the likes of which we have not witnessed before in False Bay. We should celebrate the abundance and diversity of marine life in False Bay, and allow special aggregations like this to occur without interference from humans, in order for us to coexist sustainably with sharks.”