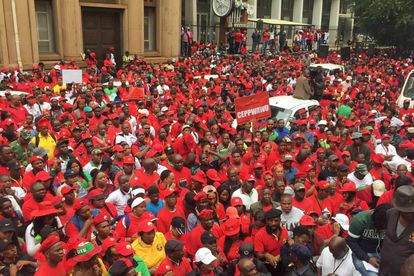 As previously reported, COSATU and its affiliates in the Western Cape plan to take to the streets on Thursday, 4 August.

The Federation reportedly applied for 3000 members to participate in the strike, which will see protestors march from Hanover Street to the seat of the provincial legislature in Wale Street and the Cape Town Civic Centre.

“We plan to bring the economy to a standstill so that the government can see how angry workers are,” said COSATU provincial secretary Malvern de Bruyn at a media briefing.

The Federation intends to deliver a list of demands to Winde, the City of Cape Town’s Law Enforcement and the national police minister, Bheki Cele.

COSATU wants both the national and provincial governments to end gang violence and improve railway safety among other demands.

READ MORE: COSATU to bring Cape Town economy ‘to a standstill’ over crime and fuel prices

Winde said all law-abiding citizens in the Western Cape, including the government, are tired of crime and living in fear. However, according to the Premier, staging a protest is not the way to go.

“This demonstration comes at a time when we need to buckle down to jumpstart the economy and create jobs after the Covid-19 State of Disaster.

“This action, however, is counter-productive as it will likely prevent hard-working citizens from getting to work on the day and will most certainly scupper the earnings of those taking part,” said Winde.

WINDE SAYS GRIEVANCES MUST BE TAKEN TO PRETORIA

Winde said the Western Cape government is taking money out of its own budget to address some of COSATU’s concerns, specifically gang and gender-based violence. He invited the Federation to discuss taking grievances of the unions and the residents of the Western Cape to “the doorstep of the National Government specifically the President and Police Ministry, which sits in Pretoria, not the Western Cape.”

“Our Safety Plan is based on a scientific approach to addressing crime, while our Law Enforcement Advancement Plan (LEAP) is a “force multiplier” on the ground, helping other law enforcement agencies – especially the South African Police Service, which has all the government money to fight crime, to keep our communities safe,” said Winde.

He indicated that the province will push ahead with its plans to devolve the police service to a more local level.