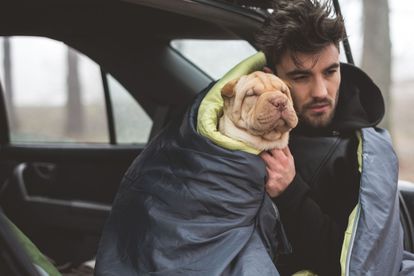 Be warned – the cold weather is not over yet. A cold front is expected to make landfall in the Western Cape on Sunday evening.

HIGH-SIDED VEHICLES AT RISK OF BEING BLOWN OVER

The South African Weather Services (SAWS) has warned that a cold front projected to make landfall during Sunday evening is expected to be preceded by strong north-westerly winds.

“These winds could gust up to 70km/h at times over the interior of the Northern Cape and Western Cape provinces.

SAWS warned that the winds could cause localised problems for high-sided vehicles as they may be at risk of being blown over due to cross-winds on prone routes such as the N1, R321, and R43.

“Localised damage to infrastructure like roofs blown off, especially over informal settlements, is a possibility.”

ALSO READ: Watch: This amazing Igloo was built during snowfall in Western Cape

With snowfall last month in several parts of South African many eager snow-seeking South Africans went looking for places where they could see fluffy white snow.

SIBLINGS BUILT AN AMAZING IGLOO DESPITE THE COLD

For Wilroux and his sister Lenchen-Marié Ackermann this was an opportunity to build an igloo.

They built this amazing igloo at the top of the Perdekop hiking trail at Mont Rochelle Nature Reserve on the Franschhoek Pass using a tin lunch box to make the blocks.

Wilroux said the whole trip took them about 10 hours, including the walk and the building.

“It was snowing all over, so we decided to head to the Mont Rochelle Nature reserve.”

He said he and a friend had built an igloo last year, so he and his sister decided to make a better one.

“It took us long to build the igloo as we had to use the snow, which only formed a thin layer on the ground.”