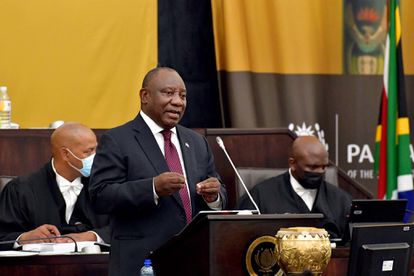 Cyril Ramaphosa reaffirmed the South African government’s refusal to choose sides in the Russian invasion of Ukraine while responding to questions in the National Assembly on Thursday, 17 February.

RAMAPHOSA WANTS TO FOCUS ON THE POSITIVE

Ramaphosa said despite the calls for the government to condemn Russia it will continue with its balanced approach, “which is appreciated by many.”

He said the government’s approach to the “undesirable” situation is to insist on mediation, dialogue and negotiation between Russia and Ukraine.

“I am pleased to continue hearing – and having heard it from President Putin himself – that the negotiations are ongoing and they are making progress.

“For us, this is an important development. Whilst other people scream and shout, we want to focus on the positive outcome of those negotiations and that mediation process – that is what is important,” said the president.

Ramaphosa, who recently spoke with Putin via telephone, said he would like to speak to Ukrainian president Volodymyr Zelensky.

“We are also speaking to a number of other world leaders and only last night, as I was addressing a dinner, I got a message that two other heads of state also want to talk to South Africa.

“So, the position that we have taken can be taken forward and some are even approaching us on a role that we can play,” he said.

SA APPROACHED TO ‘PLAY A ROLE’

Ramaphosa recognised that South Africa is not an economic heavyweight and does not wield as much influence as other countries. Nevertheless, he said, the country is being approached to play a role in brokering peace between Russia and Ukraine.

Ramaphosa did not elaborate on who has approached the country.

He referred to the role South Africa played in bringing an end to the Troubles in Northern Ireland with the signing of the Good Friday Agreement and intimated that the country would not choose sides in the current conflict for the same reasons.

“We took that view because we knew that by condemning we would foreclose any role we could play and as a result we were brought in. We were brought in to implement the Good Friday Agreement. In the end, we created a very conducive situation for the guns to be silenced in Northern Ireland.

“I’ll forever remember one occasion when I was in Belfast when an old Irish lady came to me as I was at the meeting and she said ‘You are Cyril Ramaphosa? You come from South Africa and you’ve been brought here to come and resolve our conflict?’ she says ‘Wow, the old colonialists must be turning in their graves,’” said Ramaphosa.