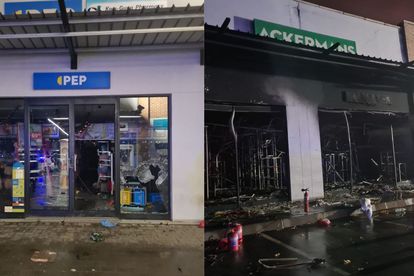 A 50-year-old woman was shot and killed, and several shops were torched and looted when protests in Vosman turned violent on Monday evening.

Police have called for calm after the incidents of violent protests at Vosman near Witbank.

According to police spokesperson Brigadier Selvy Mohlala, police have been on high alert since the violence erupted and then became worse yesterday and have heightened visibility to monitor the situation in the area following the protests, which also affected services.

THE WOMAN WAS SHOT AND KILLED ON MONDAY

“Preliminary report indicates that the incident follows power blackouts which were experienced in the area for the past weeks. All entrances and exits roads were reportedly barricaded with stones and burning tyres.”

MOTORISTS WERE URGED TO DRIVE WITH CAUTION ON TUESDAY

He said on Monday evening, the protests in KwaGuqa Extension reportedly turned violent with reports of looting and torching of the Pick ‘n Pay Shopping Centre in Extension 5.

“A 50-year-old woman was shot and taken to hospital. Unfortunately, she passed on yesterday, Monday, 07 November 2022. We are not yet certain who shot the woman however, an immediate investigation is underway.”

He said the investigation would be looking into the allegations that the woman and two other people were shot by a member or members of the police.

“Police remain in the area, and motorists are urged to drive with caution along the N4 Road near KG Mall as well as on other roads nearby.”

Mohlala said the N4 road was cleared after being blockaded last night.

“A case of public violence has been opened. Two people have been arrested so far.”