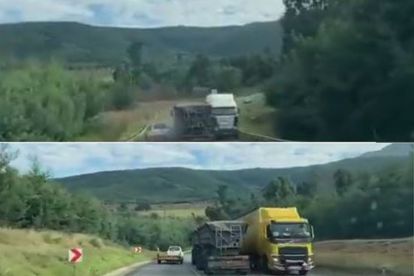 The reckless truck driver caught on camera driving recklessly and nearly causing an accident has been found and arrested.

Mpumalanga MEC for Community Safety, Security and Liaison, Vusi Shongwe said although the incident occurred on the KwaZulu-Natal’s R34 road, the truck has a Mpumalanga registration.

He said on Monday that the driver has since been found and arrested.

Shongwe, furthermore called for the withdrawal of the driving license for the reckless truck driver. He condemned the incident saying the driver had put many lives in great danger with that driving.

THE DRIVER HAD PUT MANY LIVES IN GREAT DANGER

“Such behaviour should be condemned in the strongest possible terms, and such drivers should no longer be allowed on the road as they endanger other people’s lives.

“People like the driver in question do not deserve to have driving licenses. Crashes that involve trucks often produce many fatalities, especially when public transport is involved,” he said.

Shongwe acknowledged the contributions made by the trucking industry to the economy of the country. However, he pleaded with those driving the trucks to do so with great caution and discipline.

He said truck owners should assess drivers they hire and always instill a sense of responsible driving in them to ensure that they always adhere to the rules of the road and become road safety ambassadors.

To ensure such incidences don’t repeat, the Department will engage with the owner of the truck.

DEPARTMENT WILL ENGAGE WITH THE OWNER OF THIS TRUCK

“The Department will also have a programme to engage other truck owners to ensure safety on the roads.”