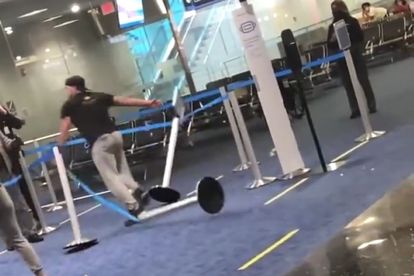 A man was caught on camera screaming and even getting violent at the American Airlines terminal at Miami International Airport. The incident occurred on Friday, 27 August 2021.

In the clip, the man is seen not wearing a mask and yelling profanities directed towards someone who appears to be an airport customs official, including the n-word.

He can be seen kicking objects, knocking down and at some point, picks up a security post and swings it at bystanders, including airport staff. He also gets physical with one airport customs official.

There has since been an update on the incident. Police managed to apprehend the man and took him to a nearby hospital for evaluation. They say the man was a military veteran who was going through a “crisis”.

Witnesses told Local 10 News that they believe the man was intoxicated.

According to a viewer who also spoke to the news outlet, just before the incident at the airport, the man entered the women’s restroom and got into a physical altercation with his girlfriend. The viewer said the man was then denied boarding on the flight due to his aggressive and possibly Intoxicated behavior.

American Airlines released a statement in reaction to the incident.

“When traveling with us, we expect all customers to follow our policies and we will not tolerate violence of any kind toward our team members. We thank our MIA team for their quick action and professionalism to ensure the safety of our customers and fellow team members,” it said in part.

According to Miami International Airport, there has been an increase in aggressive passenger behavior.

The Federal Aviation Administration says back in 2019, there were 150 recorded incidents of unruly behavior across the country, while in 2021, more than 3 800 incidents have been picked up so far.