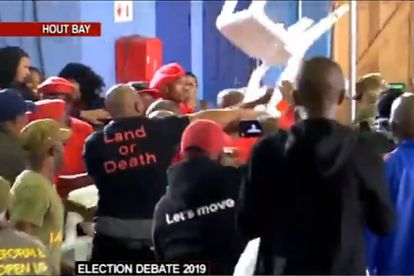 The Hout Bay election debate that was hosted by SABC News’ Morning Live show, did not turn out the way it was anticipated.

What happened at the Hout Bay election debate?

On Friday morning, residents of the coastal town gathered at the Hangberg Sports and Recreation centre to voice out their frustrations to their respective regional political leaders.

Members of the ANC and Patricia de Lille’s newly-formed political party, Good, were also in the panel to discuss issues of national importance, with Sakina Kamwendo moderating the debate.

Each panelist was tasked with convincing the audience about their party’s strategic plan to alleviate the poverty and hardship that has bedevilled rural areas of the Western Cape, including Hout Bay’s Imizamo Yethu — a township that is almost displaced from the aristocratic beauty of the town’s suburbia.

Unfortunately, the residents who were hoping to use the debate as an opportunity to voice their frustrations with their political leaders were denied the chance to do so, after things broke out into chaos.

What caused the fight?

Crime, unemployment and land were the three subjects of contention. Expectedly, the differing views in these emotionally-triggering topics was a recipe for disaster.

As the provincial leadership of the Black First Land First movement was voicing his discontent with the perceived favouritism Kamwendo supposedly showed in placing the ‘non-parliamentary’ parties away from their established opposition, chaos broke out.

EFF supporters could be seen throwing chairs at opposition party members. It is not clear as to what fueled the violence but it sure looked very ugly.

In the video below, skip to 3:44 to watch the fight that broke out at the election debate.