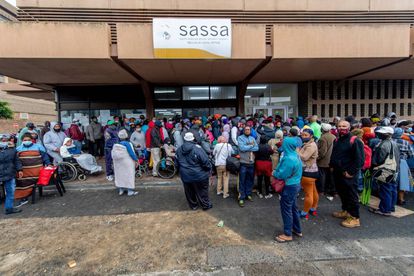 [FILE] A backlog of R350 grant payments is causing a nightmare for SASSA – Photo: Twitter

[FILE] A backlog of R350 grant payments is causing a nightmare for SASSA – Photo: Twitter

The week-long riots and looting that consumed parts of KwaZulu-Natal and Gauteng have left destruction in its wake. SASSA offices and SA post offices were also not spared with a number of them being vandalised and burnt down. This was announced by Acting Minister in the Presidency Khumbudzo Ntshavheni during a media briefing on Wednesday.

Ntshavheni said that after the violence and looting, they found that 20 SASSA local offices and 21 Post Offices in KZN had been vandalised and burnt down and this no doubt had a major impact on those who are most vulnerable and depend greatly on their social grants.

“These offices are not offering social services and beneficiaries have been advised to use ATMs and shops to access their social grants,” she said.

Furthermore, SASSA grants that were earmarked to be paid on 20 July had to be postponed to a later date.

“In Gauteng, one SASSA office located in Alexandra was burnt down and beneficiaries have been referred to alternative sites. This is of great concern to us as government because this will have a great impact on the vulnerable who will not be able to access social support from SASSA,” added Ntshavheni.

WILL THE SRD GRANT MAKE A COMEBACK?

In terms of a possible return of the SASSA SRD grant, Ntshvheni said she did not want to preempt the National Coronavirus Command Council, which by the way, are scheduled to meet this Sunday 25 July.

“Whether the social relief grant will come back, I will not want to venture and preempt Cabinet’s decision on the proposals that are on the table from either social partners or from either ourselves as government. We need to allow the Cabinet to make the decision and get the state president to respond or report on those decisions,” she added.

ALSO READ: Basic Income Grant for SA ‘will be worth over three times more’ than R350 grant

Apart from the destruction inflicted on SASSA and post offices, President Cyril Ramaphosa, this week, convened a meeting of over 100 business leaders to discuss where government and business could work together to rebuild the country in the aftermath of the crisis.

Ntshavheni said Ramaphosa was joined by the Premiers of KwaZulu-Natal and Gauteng and several  Ministers of the Economic Cluster.

The business sector was represented by organised business including those representing informal businesses and SMMES, and CEOs from various sectors of business.