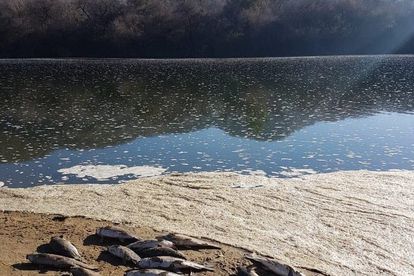 In a webinar hosted by the Mail and Guardian on Wednesday 17 February, outlining the contents of the report, it is revealed that the Emfuleni Local Municipality, the Gauteng Department of Cooperative Governance and Traditional Affairs (Cogta) and the National Department of Water and Sanitation (DWS) have over the course of the SAHRC’s investigation – which began in 2018 – shifted the blame to other parties – including one another – for the crisis at the Vaal River.

Emfuleni says they are not the only municipality which has contributed to the crisis, a point that is noted in the SAHRC’s report. The City of Johannesburg Metropolitan Municipality as well as the Midvaal Municipality reportedly also directed sewage and wastewater material towards the wastewater sewerage systems situated in the Emfuleni Municipality – corroborating that these two municipalities do indeed add to the ongoing pollution.

The Department of Water and Sanitation confirm availing funds to Emfuleni to resolve the problem, but say the cash-strapped municipality has squandered the funds – highlighting the mismanagement issues at the Gauteng based municipality which have been attributed to political instability.

The panelists at the briefing – North West University, Johann Tempelhoff; Maureen Stewart from Save the Vaal, Samson Mokoena, Coordinator at the Vaal Environmental Justice Alliance; and Shirley Mlombo from the Human Rights Commission – ultimately are in agreement that the buck stops with the Department of Water and Sanitation (DWS).

It is this national department that grants and issues municipalities with licenses to run water and wastewater service and most importantly it’s the body that enforces and must ensure adherence to the National Water Act.

READ: Final Report of the Gauteng Provincial Inquiry Into the Sewage Problem of the Vaal River

Approximately 19 million people depend on the Vaal River in different ways, with the Free State town of Parys being the lesser-known casualty of the Vaal Water Crisis.

Reports have indicated that drinking water at the Gauteng municipality is safe to drink because it comes from the Vaal Dam and undergoes an extensive purification process by Rand Water, while Parys which falls under Ngwathe Local Municipality, on the other end bears the brunt of the pollution with it a) being located downstream where pollution accumulates and b) with the municipality’s drinking water coming from the river.

Ngwathe, which faces its own set of governance issues, has long struggled to sufficiently treat the raw water it retrieves from the Vaal River for consumption due to several problems at its water treatment plant. The result of this is the widely circulated pictures of brown water coming from domestic taps in the Free State town.

In 2020 the Free State municipality roped in Sedibeng Water to oversee a mammoth project to “fix the Water Treatment Trident plant” which according to Naale is currently out of operation.

When rectified, this will assist the municipality in resolving their purification issues, making domestic water in the area safer to drink.