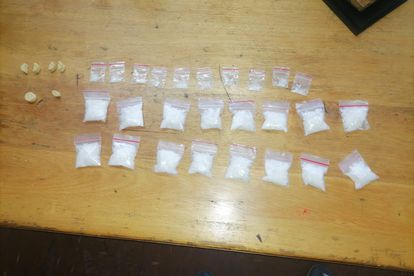 An alleged drug dealer was arrested in Upington over the weekend while members of Upington Crime Prevention confiscated drugs, including dagga, Tik, and Mandrax.

A RESIDENCE WAS SEARCHED IN UPINGTON

Police spokesperson Sergeant Omphile Masegela said police acted on information received about drugs suspected to be sold at a residence in Upington.

“Police searched the premises and found drugs hidden inside a drawer. A 28-year-old man was arrested. The man is expected to appear in court soon.”

The Acting Station Commander of Upington, Colonel Gert Jobs, commended members and encouraged them to continue with the effort to remove drugs from the streets of Upington.

THE DEDICATED MEMBERS WERE COMMENDED

Meanwhile, earlier this week, the Olifantshoek Visible Policing unit and the Kuruman K9 unit followed up on information and pounced on an alleged drug dealer.

ANOTHER ALLEGED DRUG DEALER WAS ARRESTED

Police spokesperson Lt-Col Sergio Kock said on 11 February 2022, at about 09:00, the police raided a house in Skerpdraai, Olifantshoek.

“Police confiscated 25 dagga sachets, 78 dagga pokes, and an undisclosed amount of cash from the premises,” he said.

HE WILL BE APPEARING IN COURT SOON

The 44-year-old male will be appearing in court soon on charges of dealing in dagga.