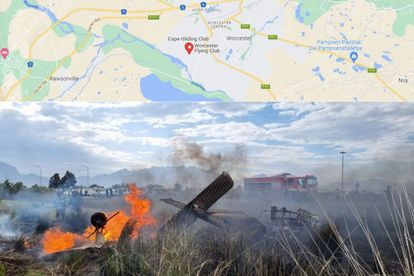 “The aircraft took off from Worcester Aerodrome in the Western Cape with the intention to land at the same Aerodrome.

“The accident occurred during the landing phase within the Aerodrome. Two persons were on board the aircraft; both occupants sustained injuries and were taken to hospital.”

TWO INVESTIGATORS WERE DISPATCHED TO THE ACCIDENT SITE

The Accident and Incident Investigation Division (AIID) started the process of collecting evidence, and two investigators were dispatched to the accident site to gather more information.

“This will assist in defining the size and scope of the investigation as well as the anticipated timeframe for the completion of a final accident investigation report.”

Gwebu said a preliminary report would be issued within 30 days from the day of this accident.

LAST WEEK HUNDREDS OF LOOTERS SWARMED THE WRECKAGE OF AN AIRCRAFT

“In instances where an investigation takes longer than twelve months to complete, the investigation team is expected to issue an interim statement to indicate the progress made at that point in time.”

She furthermore said it should be noted that in terms of Regulation 12.03.1 of the Civil Aviation Regulations (2011), an aircraft accident investigation report is compiled in the interest of the promotion of aviation safety and the reduction of the risk of aviation accidents or incidents and not to apportion blame or liability.

Meanwhile, last week hundreds of looters swarmed the wreckage of an aircraft minutes after it crashed in a field in Cape Town. The injured pilot and occupants were robbed of their personal belongings.

WATCH THE VIDEOS OF THE HUNDREDS OF LOOTERS SWARMING THE WRECKAGE

According to City of Cape MayCo Member for Safety and Security, Councillor JP Smith, the light aircraft went down in the Luzuko area of Lower Crossroads shortly before 18:00 on Tuesday.

A crowd quickly gathered at the crash site and when the pilot radioed air traffic control to call for urgent assistance, he reportedly said the aircraft’s occupants were being robbed of their personal belongings and the plane was being looted.

The City spokesperson Eckhardt Winks said the light aircraft belongs to a local aviation school that operates at the airport. It was on a training flight with a student when the engine failed.