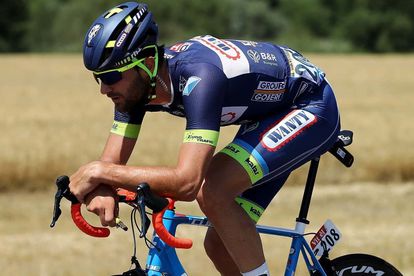 The 2018 Tour de France is in full swing. The race has already seen a with withdrawals, crashes and boos.

But if you’re a more frivolous follower of the Tour, you might be interested in more “meaningless” stats. Not that this specific stat is all that meaningless. Cyclists are notoriously skinny and even more so when it comes to riding in grand tours.

In 2016, Outside crunched some numbers to figure out just how skinny Tour de France riders are. They noted:

Contenders for the yellow jersey now sport between four and six percent body fat. Let’s put that in context. When people drop below three percent body fat, they run a risk of dying. Many of these racers spend the entire season paring their body weight down so that they arrive at the Tour as lean as possible. Voigt speaks from personal experience, who says he started each Tour at 4.5 percent body fat and generally finished at 3.8 percent.

Riders want to be light so that they can power through on the tougher stages, but how light is light? And what is considered heavy for a cyclist riding the Tour de France?

Weight alone isn’t an ideal indicator, because taller riders will weigh more,  but for the purposes of this article, we’ll take a look at weight in isolation… because that’s what the commentators keep going on about.

For context, most riders seem to fall in the 60 – 70kg category. And yes, riders might lose some weight on tours, but not much. They’ve got top nutritionist on their teams to make sure they put back every single calorie they expend so they can function at optimal capacity.

Who are the heaviest riders at the 2018 Tour de France?

Note: We’re using statistics from ProCyclingStats.com and we’ve only picked five riders out of the bunch.

This piece will be updated.