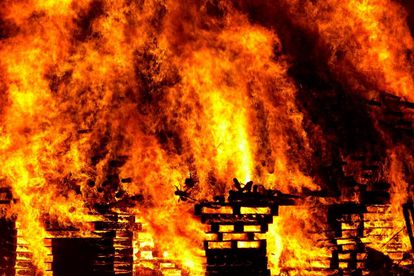 Three men were brutally murdered in Morokweng village outside Vryburg after the house they were in was set alight on Tuesday afternoon.

Police in Potchefstroom remains on high alert following the incident in which some members of the community allegedly set alight a house with three men inside.

According to the police, some members of the community went to a rented house at Ga-Mokgopha Section where three men from Carletonville, stayed.

The house was allegedly pelted with stones. While escaping the attack, the victims allegedly stabbed and injured some of the attackers.

“The group then chased and caught the men who were accused of dealing in drugs. They were then taken back to the house which was eventually set alight with the trio inside,”

The victims are between the ages of 22 and 36. They were burnt and died in the house.

As a result, a case with charges of kidnapping, murder and arson is being investigated by the police.

No one has been arrested.

The Provincial Commissioner, Lieutenant General Sello Kwena is perturbed by the incident.

He said what happened in Morokweng is inhumane, totally unacceptable and must be condemned.

“No human being should be subjected by another to any kind of brutal attack irrespective of the nature of the accusation. I would like to reiterate that taking the law into one’s hands is unlawful. Those who are perpetrating such acts, will be dealt with accordingly,”

Police have since the incident maintained a high presence in the area to restore order.

Members of the community are urged to remain calm and to work with the police through Community Police Forum (CPF). This will help ensure that those who are behind these appalling acts are brought to book.

Community members can report any crime to their nearest police station.

Alternatively, call Crime Stop on 08600 10111, the nearest police station or submit information through the MySAPS App.

Callers may opt to remain anonymous and any information received will be treated with the strictest confidentiality.