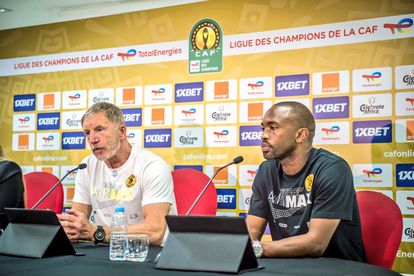 Kaizer Chiefs have R34 million up for grabs but even that large sum of money pales in comparison for what is at stake on Saturday evening.

Amakhosi have an opportunity to win their first-ever star, a chance for players to cement their place in club history when they take on defending champions, Al Ahly.

Chiefs have made it to their maiden CAF Champions League final. The men from Naturena have won everything back at home in South Africa.

This is the one that has always eluded them. Stuart Baxter was the last man to lead them to silverware back in 2015 when he won the PSL.

However, Baxter has the chance to win the biggest trophy available in Africa. To Amakhosi fans, it is the big one and the one title that Mamelodi Sundowns and Orlando Pirates have that they don’t.

Tonight they will be representing the whole of Soweto and South Africa as they look to avenge Sundowns and Pirates in the process.

Sundowns were knocked out by former coach, Pitso Mosimane while Pirates lost in the final to Al Ahly back in 2013.

Now, Chiefs lie potentially 90 minutes away from cementing their place in club history.

Therefore, securing their status as the most successful side in SA Football. A win tonight would put to bed any debate around this and would have the whole of Naturena explode with jubilation.

LEGENDS ARE DEFINED IN FINALS

Bernard Parker, Willard Katsande, Eric Mathoho and Itumeleng Khune have served this club with excellence and aplomb for the better part of the last decade.

These men are facing the end stages of their careers and are already Chiefs club legends. They deserve to conquer Africa and have a legendary story befitting of their dedication to Amakhosi. None would be more fitting than conquering Africa. This would cement their names in history as true greats.

For every Amakhosi player stepping onto the pitch, they can cement their places in history. Greatness awaits and history beckons for our Amakhosi heroes.

All the hard work, passion, dedication and sacrifice have lead to this moment.

There is R34 million and a historic first star as club legends aim to cement their legacy. One more big performance, one more giant to slay.

We wish our Amakhosi boys Goodluck as they aim to conquer Mosimane’s Al Ahly on Saturday evening.