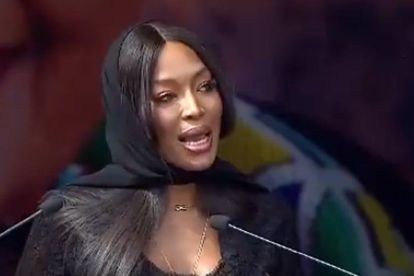 The 51-year-old penned a letter to Zuma on Instagram accusing him of undermining the rule of law by defying the courts.

In her letter, Naomi wrote: ”This isn’t the South Africa I remember and that millions of South Africans fought for. The South Africa that overcame Apartheid , showed the world that change was possible. Led the battle in the fight against HIV/AIDS and has weathered countless efforts to undermine the new South Africa.”

“I have watched how over the last few years you have protested your innocence at the allegations tabled against you of corruption and allowing mass State Capture. I have seen you go out of your way to avoid having to deal with these matters in court and avoid a Commission setup to investigate State Capture.

“You have talked of the rule of law and the South African constitution being something that should apply to everyone. Yet you defied the courts and were sentenced 15 months in prison. Now upon your incarceration a group of protests under the #Freezuma banner broke out igniting the worst violence and criminality South Africa has seen since the end of apartheid.”

Zuma’s daughter then hit back at Campbell saying the South Africa she claims to remember is one she experienced from the comfort of a presidential guesthouse and luxury accommodation.

“A couple of visits to South Africa and being a friend of Madiba does not equate to you knowing South Africa. What you remember is not, and has never been a reflection of the true South Africa.” Jabu Zuma wrote

Jabu went on to say if Naomi had done some research she would understand that the civil unrest is bigger than Zuma’s arrest.

“South Africans are hungry, impoverished, unemployed and tired of living in a country whereby the government actively marginalises them. As history shows, when the poor have nothing else left to eat they eat the rich.

“Since you’re in the mood to condemn, start with the Ramaphosa administration that has looted an estimated R500 billion in COVID-19 relief funds yet expects its people to live off R350/month in a pandemic…Please understand what you call ‘Madiba’s vision’ is actually the shared vision of the many freedom fighters and liberators who fought tirelessly for our freedom… This is bigger than you and I, let’s leave it to the adults.