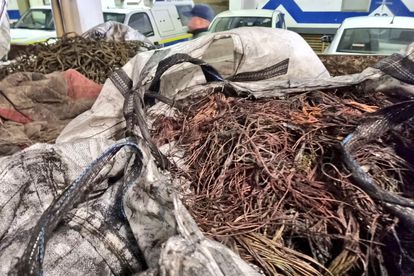 Eight suspects were arrested by the Johannesburg Metro Police Department (JMPD) Undercover Unit for the possession of stolen copper cables worth approximately R1 million in Jeppestown.

This comes as suspects were also apprehended by a community in Eldorado Park for allegedly stealing copper cables this week.

According to JMPD, officers received information of a truck transporting stolen copper cables in Jeppestown.

“They tactically approached and stopped the truck and escort vehicle at Commissioner and John Paige Street in Jeppestown.

“The vehicles were searched and eight male suspects were found in possession of stolen copper cables with an estimated value of R1 million. The suspects were immediately apprehended.”

Members of City Power were also called and identified the cables as belonging to Telkom.

NO POWER IN ELDORADO PARK FOR OVER A WEEK

Eldorado Park residents have been without electricity for over a week after a substation in the area was bombed last weekend.

Apart from that, cable theft in the area is also on the rise, reportedly.

City of Johannesburg Mayor, Mpho Phalatse said the recent spate of substation fires in the metro are due to vandalism and sabotage.

“If you take this and the fact that we have had  so many other incidents such as tunnel fires, cable theft in different parts of Johannesburg, it is clear that this is all part of a coordinated sabotage of this administration,” she said.

Phalatse who delivered her maiden State of the City Address promised to solve Johannesburg electricity woes by roping in Independent Power Producers to reduce reliance on Eskom.