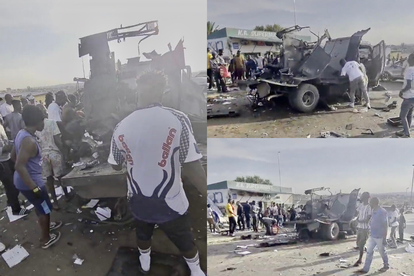 Onlookers can be seen searching the remnants of the CIT van in the hopes of finding left behind cash. Image: Yusuf Abramjee / Twitter

Onlookers can be seen searching the remnants of the CIT van in the hopes of finding left behind cash. Image: Yusuf Abramjee / Twitter

The festive season in South Africa has seemingly drawn out the nation’s crooks with a CIT vehicle hit by a heist in Tembisa.

Footage of the crime scene has since surfaced online, revealing that even civilian bystanders aren’t above taking chances.

The bystanders can be viewed scouring the aftermath of what appears to be a bombing, allegedly hoping to get their hands on cash left behind.

Sharing images from the incident, Yusuf Abramjee commented that this is a frequent occurrence.

“As the robbers left, members of the public combed the scene looking for cash left behind. This happens regularly at crime scenes.”

The incident reportedly took place on Tuesday and is just the latest in a number of CIT heists.

These vehicles are increasingly being targeted by criminal groups due to the large quantity of cash they carry.

The suspect, accused of murder in addition to robbery, was one of the five most wanted suspects in Gauteng.

Police spokesperson Captain Mavela Masondo commented at the time that the man had been nabbed during a province wide operation.

“He was initially arrested in 2017 for murder and cash-in-transit robbery in Pretoria but absconded from his trial. A warrant for his arrest was issued and the police CIT task team and tactical response team traced and arrested him again.”

During the operation 1 170 people had been taken into custody by Gauteng law enforcement authorities for a large variety of criminal activity.

However, it remains to be seen whether or not authorities will succeed in apprehending those responsible for this incident. At the time of publication no official statement on the heist had been made available.