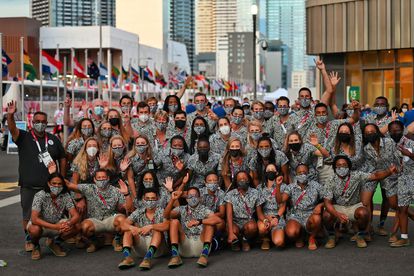 The Minister for Arts, Culture and Sport will hold a ‘post-mortem’ for Team SA’s efforts at the Tokyo Olympics, after South Africa recorded its worst performance at the games in 13 years. Nathi Mthethwa struggled to hide the extent of his disappointment during a media engagement last week – and vowed to oversee a period of ‘transformation’.

It’s all over for Team SA

While answering questions at the #ForTheRecord event, Mthethwa was pushed on Team SA’s lowly medal haul. Only two athletes – from a delegation of 185 – actually won anything in Japan. Swimmer Tatjana Schoenmaker bagged a gold and a silver, and surfer Bianca Buitendag also recorded a second-place finish. Elsewhere, there were disappointments.

Wayde van Niekerk and Akani Simbini both missed out on medals, as efforts on the track fell desperately short. Hopes of securing another prize fell on the broad shoulders of our outsiders – and despite his heroics in the shotput event, 21-year-old Kyle Blignaut finished sixth in the final heat. Mthethwa, therefore, believes a serious probe is needed.

“I can say here that I think SA performed much below what was expected of us as a country. As a department, we will look into why this happened. To the performance of Team SA, I said that I don’t want to delve deeper into the matter of their performance at the Olympics until the athletes and Sascoc officials are also is back in the country.”

Tokyo Olympics: Transformation to feature in any post-mortem

He also confirmed that his department would work with the Basic Education ministry, in order to ensure that school sports are accessible to all. Team SA received further criticism for having a predominantly white squad, despite South Africa only having a caucasian population of about 8%. Transformation, therefore, could play a key role in any review…

“We will have a post-mortem of what happened in Tokyo, but I am saying that we could have done better and put ourselves in a better position than where we are. Already, we are on that path of ensuring there is more transformation – so that when you have a team representing South Africa, it reflects SA’s demographics” | Nathi Mthethwa