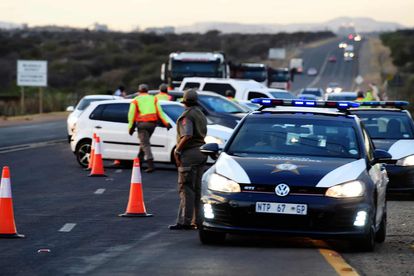 Traffic officers during a roadblock on R565 at Ledig in North West. (Photo: GCIS)

Traffic officers during a roadblock on R565 at Ledig in North West. (Photo: GCIS)

Where are the arrests being made?

Operations were conducted in Delft, Manenberg, Mfuleni and Kraaifontein, leading to 176 taxi drivers arrested between Thursday and Sunday, Smith said. One of the taxi drivers, aged 50, had 167 outstanding warrants to the value of R230,900. He was also found in possession of a firearm with an expired licence.

Smith said officers also impounded 134 vehicles, 242 cellphones and issued 27,468 fines for various offences. General enforcement activities resulted in the arrest of 16 motorists for drunk driving, 13 for reckless and negligent driving, 84 for outstanding warrants and 10 on a range of other charges.

“The enormity of the operation cannot be underestimated, but it needs to be done. Our traffic department continues to be overrun by complaints about the behaviour of taxi drivers, and the high number of warrants executed just in the last few days, bears testament to the problem,” Smith said.

The taxi industry needs to take responsibility for its actions. I urge errant drivers to pay their outstanding fines and to start showing greater regard for the rules of the road.”

He said in recent months, the Cape Town traffic service had increased operations in this area and would soon raise the size of the taxi enforcement unit, significantly improving its ability to respond to the ongoing contempt for traffic rules by the public transport sector.

More roadblocks are set in place

The city’s metro police had also arrested 42 motorists for driving under the influence of alcohol at various vehicle checkpoints across the city, Smith said. Another 12 suspects were arrested for possessing drugs and one for the illegal possession of ammunition.

In once incident on Thursday, officers attached to the metro police property crime unit were alerted to drug dealing taking place from a red Hyundai in Mowbray. A search revealed dagga, four cellphones and R2,250 in cash in a black backpack. The driver and passenger, aged 25 and 24, were arrested.

Smith said metro police officers also came to the aid of 54 motorists who experienced mechanical breakdowns on highways, keeping guard until they could get moving again, to prevent them from falling victim to crime.

“We renew our appeal to motorists to please ensure that their vehicles are roadworthy and that they have enough fuel to get to their destination. It’s also important to keep a spare wheel, water, as well as also oil in the vehicle, as these are the most common reasons cited for breakdowns,” he said.

“Furthermore, we remind motorists to save the number for the city’s public emergency communication centre on their cellphone, so that they can call for help in the event of a breakdown or an emergency.”