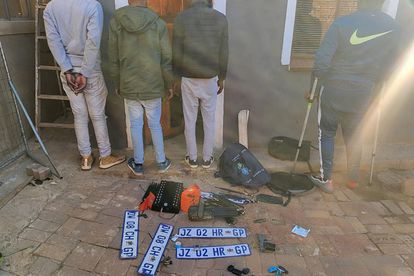 On Thursday, 30 June, the TMPD tactical members with crime intelligence and other law enforcement officers responded to information received about suspects who were planning a cross pavement robbery.

WHAT WAS FOUND IN POSSESSION OF CASH-IN-TRANSIT GANG

According to TMPD, the house of the suspects was identified in Atteridgeville. A C-class Mercedes Benz vehicle was seen leaving the house before the team arrived.

“The officers tactically approached the house and found four suspects.
Inside the house, two military signal jammers were recovered, one firearm and sets of number plates were also recovered,”

part of the statement read.

“The four suspects were arrested for conspiracy to commit robbery, possession of unlicensed firearm and ammunition and possession of suspected stolen vehicle.

Two of the suspects were linked to previous cases of pavement robberies in Tshwane,” TMPD further detailed.

As the case will be investigated further, members of the public who might have any information regarding this crime may contact the nearest South African Police Services (SAPS) or TMPD at 012 358 7095/6.