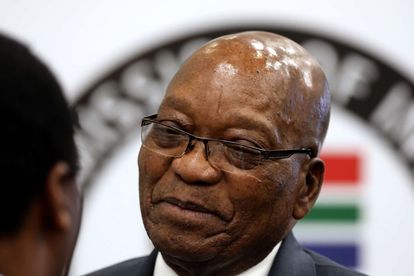 Former president Jacob Zuma continues to give his testimony at the hearings of the judicial Commission of Inquiry in Allegations of State Capture, Corruption and Fraud in the Public Sector including Organs of State. Photo: SANDILE NDLOVU

Former president Jacob Zuma continues to give his testimony at the hearings of the judicial Commission of Inquiry in Allegations of State Capture, Corruption and Fraud in the Public Sector including Organs of State. Photo: SANDILE NDLOVU

Shortly after he concluded his business at the State Capture Inquiry, former president Jacob Zuma addressed his supporters outside the headquarters in Parktown, Johannesburg, and boy did he turn the knob on the ‘spy-infested’ ANC.

After what seemed to be a bewildering restart to his testimony, Zuma doubled back on his intention to withdraw from testifying at the commission, and told Deputy Chief Justice, Raymond Zondo that he would return to give his account once more in the near future.

Much of Zuma’s complaints were centred around this belief he has that the commission is somehow part of a plot to assassinate his character.

During his address to his supporters, he made correlations between former Public Protector, Thuli Madonsela’s move to establish the commission with the apparent 1990 plot — by three intelligence agencies — to incinerate him politically.

Zuma charged that the term ‘State Capture’ was coined by Madonsela to signify her allegiance with the dark forces that have been on his trail for the past 29 years.

He further went on to state that the commission was a mere formality to draw him in so he could be treated as a suspect.

However, the most startling statement Zuma made came when he told a story about an assassination attempt against former leader of the South African Communist Party (SACP), Chris Hani.

Zuma revealed that if it was not for the then-General of the apartheid defence force, Hani’s home in Dawn Park, Boksburg, would have been bombed with him and his children in it.

“I’m asking a question. Who gave information about comrade Chris Hani’s house, that was saved by [the] General who said ‘no, if there are kids there‘? That is the question. Who has sold Chris Hani? Maybe one day the question will be answered, and I don’t want to get to many issues, ” Zuma said.

Zuma left the question hanging, perhaps purposefully so, to send a stern message to those it was intended for.

It is not clear when the president will return to the commission for further questioning.

When will the Zondo commission return?

The inquiry is expected to continue on Monday, 22 July, and will focus on the controversial Estina Empowerment Project.