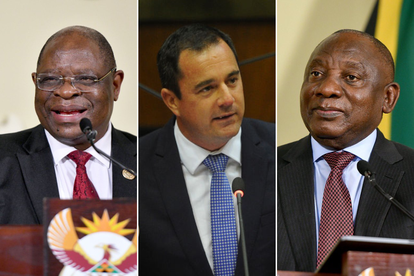 The DA has welcomed the release of the fifth and final instalment of the State Capture report. Photo: Getty Images, @PresidencyZA/ Twitter

The DA has welcomed the release of the fifth and final instalment of the State Capture report. Photo: Getty Images, @PresidencyZA/ Twitter

The final State Capture report has finally been delivered into the hands of President Cyril Ramaphosa. Chief Justice Raymond Zondo handed over the last part during a ceremony at the Union Buildings in Tshwane on Wednesday.

This brought to an end the four-and-a-half-year run for the Zondo Commission that started in 2018. Ironically, it was former President Jacob Zuma who established it to investigate State Capture allegations in the public sector.

Following the handover, political parties are not letting up the chance to quip about the exciting development. For its part, the Democratic Alliance (DA) said the handover of the fifth and final report signals the end of a process documenting a dark period.

DA leader John Steenhuisen made a series of sharp criticisms directed at the government. He labelled the ruling party – the ANC – crude, corrupt and destructive.

Meanwhile, Steenhuisen, whose party has approached the FBI over money laundering allegations against Ramaphosa, called for the prosecution of all named in the report.

Interested in the findings? Then these are the final parts of the report.

The politician further called for the re-establishment of The Scorpions, formally disbanded in January 2009 and replaced by the Hawks.