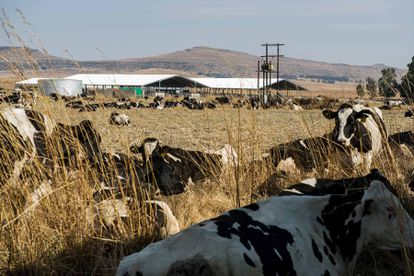 File photo of cows at the Vrede Dairy Farm Project on 12 July 2017. The farm, which was a joint private-public project between the Free State Department of Agriculture and Gupta-controlled company Estina has been in the midst of controversy after allegations of corruption and money laundering by the Gupta family emerged. Photo: Gallo Images / Rapport / Deon Raath

File photo of cows at the Vrede Dairy Farm Project on 12 July 2017. The farm, which was a joint private-public project between the Free State Department of Agriculture and Gupta-controlled company Estina has been in the midst of controversy after allegations of corruption and money laundering by the Gupta family emerged. Photo: Gallo Images / Rapport / Deon Raath

As the State Capture Inquiry concluded its business for the day, the words of former Phumelela Municipal Manager, Moses Moremi reverberated through the walls of Hillside House in Parktown, Johannesburg.

Shortly after the business cross-examining Bosasa whistleblower, Angelo Agrizzi, was concluded by Deputy Chief Justice, Raymond Zondo and Nomgcobo Jiba’s legal team, it was Moremi’s turn to give evidence on his dealings with the infamous Vrede Dairy Project.

Moremi told Zondo that he took up the managerial position at the Phumelela Municipality, in the Thabo Mofutsanyane District of the Free State, in 2011, right after he had served a stint at ABSA.

He noted that it did not take him too long to be introduced to the Vrede Dairy Project. According to Moremi, there is evidence that shows that Phumelela Municipality owns the 4 000-hectare Vrede farm, and concurred with the notion that it was leased on a 99-year agreement to a trust.

Moremi explained that the trust was founded by an all-white council in 1993, which was later handed over, together with its cattle, in 2011 for an estimated fee of R8-million. However, there is no financial proof of this transaction ever taking place, the former municipal manager said.

Asked about the first time the alarms sounded off about the project, Moremi revealed that the Free State Agricultural Department’s haste in commissioning the Vrede Dairy Project to Estina (a company linked to the embattled Gupta family) raised a few red flags.

In August 2012, he recalled, Peter Thabethe, the former head of the department, made an impromptu presentation on the project, a subject that was not on the meeting’s agenda.

The push, he said, was for the farm to be leased to Estina, a resolution he said he objected, as “they couldn’t give away municipal assets to a private company.”

Probed on why the project was rushed, Moremi indicated that the Free State government may have been acting on instructions that were directed from India.

He told the commission that, at the time, a delegation from the Free State government had travelled to India and “had engagements about this project where decisions were made.”

Did the Vrede mayor have knowledge of the Estina shenanigans?

Moremi drew former Free State Mayor, John Motaung, into the fold when he stated that he may have known about the project much earlier than the impromptu presentation in 2012.

He noted that during the presentation, Motaung’s participation gave them an indication that he had prior knowledge of the information.

However, in his testimony, Moremi did not outrightly implicate Motaung as a central figure in the Estina Dairy farm scandal.

When will the State Capture Inquiry return?

The State Capture Inquiry will return on Wednesday. However, at the close of Tuesday’s sitting, Zondo noted that informed at a later stage with regards to proceedings.