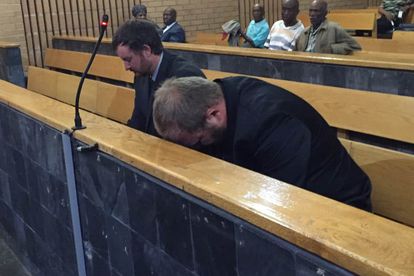 Plenty more happening in South African news today, including cabinet ministers in Twitter wars and the conclusion of the Coligny trial. Here’s what’s on the menu for Thursday…

Coligny murderers to be sentenced

Peter Doorewaard and Phil Schutte were both found guilty of the murder of a black teenager, who they accused of stealing sunflower heads from their farm. The pair have been admonished for both murder and kidnapping after they threw their victim from a moving bakkie. They will be sentenced today.

Cheryl Zondi proved to be a rock once more, as questions were raised over defence lawyer Peter Daubermann’s lines of inquiry. On Wednesday, alleged abuse victim Zondi revealed she’d even tried to take her own life. The case was postponed to 22 October.

The home affairs minister got into an argument with News24 editor Adriaan Basson on Wednesday, after the publication claimed he ignored a legal opinion to set aside the decision to give citizenship to members of the Gupta family. These days, Gigaba does most of his business via Twitter. [Read more: News24]

PIC will face an inquiry

The Public Investment Corporation (PIC) will be subject to a full investigation over some of their investment choices, following the Nhlanhla Nene scandal.

Floyd Shivambu on his brother

The Deputy President of the EFF Floyd Shivambu has stated his brother Brian would be willing to pay back the R16 million he received from VBS bank if law enforcement ask him to do so.

There was a slight decrease in the rand’s performance against the greenback on Wednesday, as ZAR lost seven cents to the dollar. Its value now stands at $14.27.

The Organisation Undoing Tax Abuse (OUTA) were so enraged with Sanral’s plans to punish e-toll dodgers, they encouraged all road users to stop paying at the gates. Sanral proposed that those avoiding the fares must have their licences blocked and get blacklisted by insurance companies.

Warm weather and heavy rain is the order of the day, and possibly the weekend. Find out more here.

Into your astrology? Then you need to see what’s in store today.

Lotto and Lotto Plus draw for Wednesday 17 October