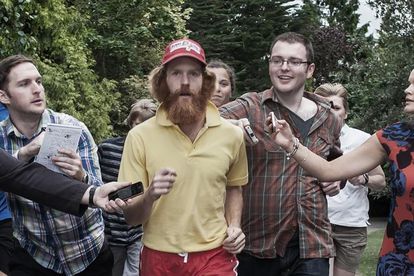 South African adventurer Sean Conway, who recently became the first person to swim the length of Britain from Land’s End to John O’Groats, is now planning to run from where he ended his swim all the way back down to Land’s End.

A full-time record breaker, motivational speaker and writer, Sean was born in Zimbabwe and grew up in KwaZulu-Natal before moving to England. He has previously cycled from Land’s End in Cornwall to John O’Groats in Scotland and if he completes this run he will become the first person in history to do a length of Britain triathlon.

The Forrest Gump-style trek will differ from most of his previous expeditions because he will be doing it completely solo and unsupported. That means carrying all his camping kit, food and water to survive. He also wants to do as much of the run off-road as possible by following paths and byways.

He will depart from John O’Groats on the morning of 9th August and aims to reach Land’s End around 20th September 2014.

“That is as much as I have planned. I haven’t planned a route or where I will stay each night. I’ll take each day as it comes. I’m going to let the adventure unfold naturally. My Britain cycle was all about exploring on the roads, the swim was exploring the coastline and now my run is to explore the mountains and paths. I want the adventure to control my decisions rather than the other way round. I’m using the Twitter handle @conway_sean for ideas on where to explore each day,” he explained.

Sean’s attitude may seem casual but his many successes may in fact owe a lot to his excellent planning skills. He has thought carefully about what to take along to make his rucksack as lightweight as possible and will only be taking 6kg of gear. First on the packing list is Sean’s mascot, The Little Flying Cow, who’s been around the world with him and even has its own twitter account @AdventureMascot. He’ll also pack a sleeping bag, camping mat, tent poles and tarpaulin, mosquito net, knife and flint.

Sean feels the most challenging aspect of his journey will be avoiding injury.

“Unlike cycling or swimming, running a marathon a day for six weeks is very hard on your body. I’m going to really have to concentrate on stretching and recovery a lot more than I have done in the past. I’m not very good at allocating stretching time. The other thing I’m going to find hard is that fact I’m not racing. This is the first adventure I am doing that will be more on the exploration side of things rather than endurance. I’ll still run till midnight though.”

The South African Brit wants his run to inspire others and has called for people with an amazing story to apply to run join him for a portion of his journey. “Want to run with me? There is only one rule. Tell me an amazing story about yourself. I want to find the most inspiring people in the UK. What have you done that no one else has? All these stories will go into a book to inspire others. I want this to be a feel-good book full of amazing people’s tales of adversity, life and adventure.”

If he could pick anyone in the world to run with, it would have to be Tom Hanks, who played Forrest Gump. Sean recently recreated the famous scene from the movie, where Forrest runs across America followed by his fans.

“How cool would it be if Tom Hanks ran with me. It’s very unlikely. I know he collects typewriters and I have a few very old ones too and that’s what we’d end up talking about,” Sean said.

There’s only one question left to answer: after conquering the length of Britain triathlon, what is Sean’s next goal?

“I want to run from Cairo to Cape Town – fast. I want to be the fastest person to travel the length of Africa on foot while meeting all the people along the route who need to be able to run to live. In Western societies running is usually done purely to get fit. Some people need to be able to run/walk far distances to get water, hunt etc. I want to immerse myself in those culture for 10 months, while running nearly two marathons a day.”