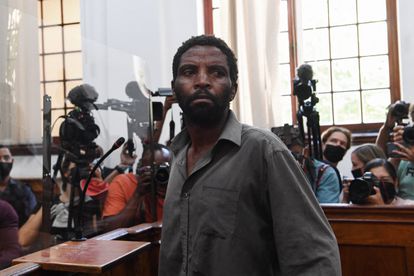 Zandile Christmas Mafe, a suspect in connection to a fire at the South African Parliament, appears in the Cape Town Magistrates Court in Cape Town on January 4, 2022. – The fire began in the early hours on January 2, 2022 and devastated much of the parliament complex in Cape Town. (Photo by RODGER BOSCH / AFP)

Zandile Christmas Mafe, a suspect in connection to a fire at the South African Parliament, appears in the Cape Town Magistrates Court in Cape Town on January 4, 2022. – The fire began in the early hours on January 2, 2022 and devastated much of the parliament complex in Cape Town. (Photo by RODGER BOSCH / AFP)

Alleged Parliament arsonist Zandile Mafe was expected to make his long-awaited bail application in the Cape Town Regional Court on Saturday, 22 January. However, his wait will continue.

National Prosecuting Authority (NPA) spokesperson Eric Ntabazalila said the planned bail application of Zandile Christmas Mafe has been moved to Saturday, 29 January, after it came to light that the accused contracted COVID-19 during his stint in Valkenberg Psychiatric Hospital.

The accused was released from Valkenberg on Wednesday, 19 January, after Judge President Hlophe, sitting with Acting Judge Raadiyah Wathen-Falken, declared the order that sent him there unlawful. He is currently remanded in Pollsmoor Prison, where he is in isolation.

“Today, the State, Defence and the Acting President of the Regional Court met virtually to discuss the logistics of the bail application and the parties agreed with the defence as they are unable to consult with Mafe until he completes his isolation on 24 January 2022,” said Ntabazalila.

The State added that a new charge sheet was handed to Mafe’s defence, on Wednesday and Thursday.

The charge sheet was adjusted after Advocate Mervyn Menigo – the lead prosecutor in the matter – studied the docket again and spoke to the investigating officer.

Menigo felt that the charges “needed to be reformulated” and Mafe now stands accused of housebreaking with intent to commit terrorism and arson, arson, terrorism and theft.

The State initially charged the 49-year-old with housebreaking, two counts of arson, possession of an explosive device, and destruction of essential infrastructure.

Mafe was referred to Valkenberg Psychiatric Hospital for evaluation after the State presented Magistrate Zamekile Mbalo with a preliminary diagnosis by District Surgeon Dr Zelda van Tonder, which alleged that the accused suffered from paranoid schizophrenia.

Mafe’s legal team brought an urgent bail application to the Western Cape High Court on Saturday,  15 January. Judge President John Hlophe presided over the matter and informed the legal teams that a bail application could not be heard before the dispute over the Valkenberg referral was settled.

On Tuesday, 18 January, Hlophe set aside the order after it was revealed that the one-page preliminary report was not very substantial.

Mafe was arrested on 2 January, the report was dated 3 January. It became apparent that Mafe was not observed for the prescribed period of 72 hours. Judge Hlophe took issue with this.

“If you look at the mental health act – there’s a reference to 72 hours. The diagnosis is not a one-off thing. I can’t just look at you and say you are insane,” said Hlophe to the State, which was opposing the application. Magistrate Mbalo who made the Valkenberg order previously indicated that he would abide by Tuesday’s outcome.

“Once we determine that the magistrate acted unlawfully – the proceedings must be set aside,” said Hlophe.

Menigo, on behalf of the State, argued for the review of Mafe’s referral for a 30-day mental observation to be redone properly in a lower court.  Hlophe reserved judgement on Tuesday but set aside the order. The Judge President said the written judgement would be available within three months.