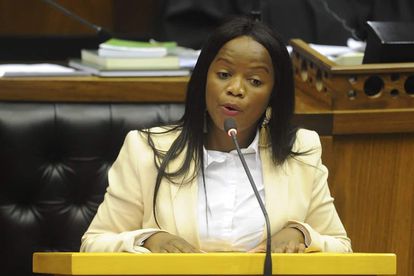 Are you keeping up with the latest news stories and headlines in South Africa? We’ve got the news you really need to know on Thursday 19 August 2021.

Things have gotten awkward in the Democratic Alliance, on social media at least, when former Democratic Alliance (DA) Member of Parliament (MP) Phumzile van Damme called out her former bosses DA leader John Steenhuisen and chief whip Natasha Mazzone for not respecting her and accused Steenhuisen of lying to the media about her.

It’s awkward too at the ANC where staff salaries have not been paid on time for a third straight month.

Phumzile van Damme has spilled the beans on her exit from the party, revealing that she resigned after the official opposition forbid her from calling out Facebook for being a no show at a Parliamentary sitting.

Van Damme went on a Twitter rant on Wednesday, 25 August 2021, which, according to her, was spurred by DA leader John Steenhuisen “lying to the media” about why she resigned.

Back in June, van Damme announced she was terminating her DA membership and focusing on a misinformation monitoring and combatting project. This was months after she handed in her resignation from Parliament, prompting speculation of her exit emanating from a strained relationship with several party leaders including Steenhuisen and Chief Whip Natasha Mazzone.

‘What regulations? We are done’ – Malema now ignoring lockdown rules

Defiant as ever, Julius Malema has never been one for following the rules – especially when they’ve been enforced by an ANC government. The EFF leader says that, as far as his party is concerned, the COVID-19 lockdown is over.

Malema was speaking during a typically fiery press conference, in which he criticised Western Imperialism for the fall of Afghanistan, and openly referred to the ANC as criminals. This formed a whole chunk of his diatribe about the lockdown regulations, and if the Municipal Elections are still taking place this year, Juju won’t adhere to any regulations.

“What lockdown regulations? We are done. There is no longer lockdown for EFF. We have registered candidates for the Local Elections. We are campaigning. No lockdown is going to tell us to do anything. We are back to the streets.”

“So, we are going to work. We are not working with lockdowns. We are back to work, and won’t listed to fools. This weekend, all our outstanding regions are going to hold RPAs. No policeman, no minister, no one can say otherwise.”

Good luck to those of you living in the City of Cape Town this week: The heavens are set to open, with a deluge of heavy rain heading straight for the major municipality. It’s one of three districts in the Western Cape that has been straddled with Level 6 weather warnings for tomorrow – capping off a bleak and bitter winter season.

Floods, traffic disruption, and even property damage are all expected to occur within the next 24 to 48 hours. Both Overstrand and Hermanus have also been placed at one of the higher alert phases – and Level 6 weather warnings inform citizens to prepare for a “high chance of a significant impact” from tomorrow onwards.

This will be in place from midday on Thursday 26 August, and will only be lifted on Friday. The South African Weather Service (SAWS) is doing everything it can to convey the severity of this storm.

“Heavy downpours are likely to lead to flooding of roads, formal and informal settlements which may lead to damage to property/infrastructure and displacement of vulnerable communities. Essential services such as water and electricity may be affected. Prepare for disruption of traffic due to roads being flooded, with increased travel time.”

After 15 months of being grounded, South African Airways (SAA) announced it would return to the skies in September 2021, in a statement on Wednesday, 25 August. The national airline’s initial flights will head from Johannesburg to Cape Town and several major cities on the African continent.

In the statement, SAA said tickets will go on sale on 26 August and Voyager bookings and Travel Credit Voucher redemption would come into play on 6 September. The first flights will be taking off on Thursday, 23 September.

Seemingly perennial financial troubles and the impact of COVID-19 grounded the airline in early 2020. According to the SAA Board, since the airline exited business rescue at the end of April 2021, the government and the board have been planning for the launch and restructuring of the airline “that South Africans can be proud of.”

Kouthar Davids made a meme of herself over the weekend, after she gave a now-infamous interview regarding her anti-vaxxer views. The jab cynic, who has sporadically featured and hosted shows on Radio 786 before, told a reporter that she ‘did not believe in COVID-19’ – only to then admit she was hospitalised with the virus earlier this year.

The foolhardy flip-flopping went viral, forcing Davids to clarify her position. The unashamed anti-vaxxer says she acknowledges the threat of coronavirus, but does not believe that the vaccines work against the disease. It’s her against 99.9% of the scientific community on this matter, just for the record…

Her contentious claims – and bizarre way of framing them – has drawn ire online, and some people who saw the interview on social media directed their frustrations towards Radio 786.

The Animal Welfare Society of South Africa (AWS) said the severed head of a tiny ginger kitten was found on the doormat of a Maneberg, Cape Town, resident on Wednesday, 25 August. This is the 43rd cat to fall victim to the killer(s) since the killing spree started.

The kitten’s head was found in 3rd Avenue in Sherwood Park, according to AWS spokesperson Allan Perrins.

“The head was x rayed and examined by our resident veterinarian who determined that it was deliberately chopped off by someone using what appears to be a sharp bladed instrument,” said Perrins.

The AWS is not sure where the rest of the cat’s body is but believes it could offer more clues as to who is behind the gruesome killing spree.