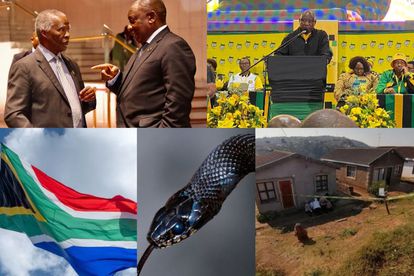 A lot can change overnight, but we’ll keep you in the know with the latest news stories and headlines in South Africa on Monday 25 July 2022.

Eish, now THIS is what we call a frosty reception! Cyril Ramaphosa was greeted by a chorus of boos at the ANC KZN conference.

Nathi Mthethwa is a man possessed: Despite a huge backlash, his contentious R22 million flag project is BACK on the table.

A snake has been terrorising patients and workers at a local clinic in Gauteng – preventing people from receiving essential treatments.

Well, they said Cyril Ramaphosa would be a brave man to go and face the disgruntled ANC KZN conference – and his decision to appear at the function on Sunday evening certainly didn’t please those in attendance.

Huge crowds took to heckling and even BOOING Cyril Ramaphosa, shortly after his arrival. Hundreds of Msholozi-supporting party members serenaded the president with a chorus of ‘Wenzeni’ Zuma’, which translates as ‘what has Zuma done?’

President vs President: ‘Fiery’ Ramaphosa HITS BACK at Mbeki criticism

Though some will argue the ANC KZN conference was not the right forum for a reply, Ramaphosa has seized the opportunity. The new leadership structures in the province are thought to be part of a pro-Zuma faction, and Cyril faces an uphill battle to keep them onside.

Earlier in the week, Mbeki slammed Ramaphosa for vowing to deliver a ‘social compact’, as outlined during SONA 2022. The promise was meant to feature a number of revolutionary politics that would help address the ills of South African society.

Back from the dead? Mthethwa resurrects plans for R22 million flag

Just give it a rest, would you? Nathi Mthethwa appears to have ignored the will of the people, after it was revealed that the Sports, Arts and Culture Minister is still trying to push through his controversial plans for a R22 million flag.

The project – set to be the tallest flag in the country and illuminate at night – will be based in Freedom Park. However, various critics and millions of citizens believe the money could be spent in a much wiser fashion. Earlier this year, these plans were shelved due to a public outcry.

Alas, it now looks like the ANC government wants to take this thing as far as it can. Mthethwa has told Parliament that the R22 million flag construction is now ‘being referred to Cabinet’, who will make a final decision on whether it gets built or not.

A clinic in Katlehong, Gauteng has been unable to treat patients properly over the past two weeks, after a snake was spotted in the building earlier this month. Staff is now ‘too scared’ to attend their workplace, and the creature remains on the loose.

The Magagula Clinic has been essentially unstaffed for seven of the past 14 days, causing a severe backlog of patients seeking treatment. Some workers have even requested to work in other facilities, due to the fear they have experienced.

“A 42-year-old woman, a grandmother, was shot and killed in the presence of her two-year-old granddaughter at her home in Ginger Road in Waterloo, KwaZulu-Natal on Saturday morning.”

He said members of RUSA arrived on the scene at approximately 09:18 after receiving multiple reports of the shooting.