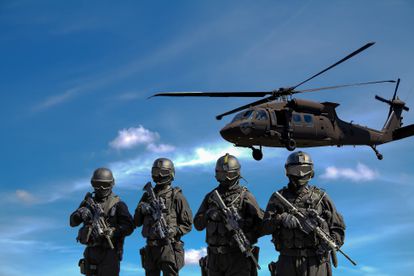 The US embassy in South Africa has twice raised the alarm recently about terrorism in the country. On 26 October it issued a security alert for a possible terror attack in Sandton, the financial centre of Johannesburg. Photo: PEXELS

The US embassy in South Africa has twice raised the alarm recently about terrorism in the country. On 26 October it issued a security alert for a possible terror attack in Sandton, the financial centre of Johannesburg. Photo: PEXELS

The US embassy in South Africa has twice raised the alarm recently about terrorism in the country. On 26 October it issued a security alert for a possible terror attack in Sandton, the financial centre of Johannesburg.

Days later it blacklisted four individuals and eight companies as terrorist financiers for Islamic State (ISIS). This followed media reports, most notably by The Economist, showing that ISIS was using South Africa to add to its war chest.

There is a long history of concerns about the country’s deficiencies in dealing with terrorism financing activities within its borders. More than 15 years ago, American terrorism expert John Solomon warned that lawlessness and government corruption in the country facilitated terrorist financing.

The latest US action comes as South Africa is rushing to avert “greylisting”: being placed on the list of countries subject to increased monitoring by the Financial Action Task Force. The inter-governmental task force has identified deficiencies in the country’s policies and efforts to combat money laundering and terrorism financing.

The issue will also surface in February 2023 when South Africa is due for another review by the Financial Action Task Force. This body evaluates steps by governments to prevent the financing of terrorism and money laundering.

In its last evaluation, published in October 2021, the task force said South Africa had a strong legal framework against money laundering and terrorism financing. But its implementation had significant shortcomings, including a failure to prosecute criminal cases.

The country has either not complied or only partially complied with 20 of the body’s recommendations to combat money laundering and terrorism financing. There is thus a strong possibility that South Africa will be added to the greylist of countries that are monitored closely.

Greylisting is an attempt by the international community to prevent illicit funds being directed towards terrorist groups.

The task force’s concerns about South Africa aren’t new. In 2009, it warned that the country needed to pay closer attention to regulating trusts, monitoring financial transactions, compliance with anti-money laundering legislation, and enhancing the disclosure of trans-border cash transfers.

The risk of greylisting suggests that the country has not taken the necessary steps to ensure compliance.

This should hardly come as a surprise to those following the growing footprint of terror groups in South Africa.

In January 2007 Jonathan Schanzer, a security analyst, reported that two South African cousins – Farhad Ahmed Dockrat, the principal of the Darus Salaam Islamic College in Laudium, Pretoria, and Dr Junaid Ismail Dockrat, a dentist – were proposed for consideration on the UN Security Council’s list of terror suspects. They had already been placed on the US treasury department’s list of Al Qaeda’s supporters.

According to papers submitted to the Security Council, Farhad was alleged to be an Al Qaeda “facilitator and terrorist financier”. Junaid, it was claimed, was also an Al Qaeda “financier, recruiter and facilitator”.

Since 2007, the South African government has not done much to ensure that the country does not become a terrorist haven.

Corruption, general lawlessness and a security apparatus focused on party factional battles all account for why terrorist financiers thrive in the country.

My book documents the case of Yassin al-Qadi, a US-designated terrorist financier, who invested US$3 million for a 12% stake in Global Diamond Resources, which mined diamonds in South Africa. He also controlled New Diamond Corporation, an offshore company that had mining interests in the country.

Then there was the case of Abd al-Muhsin al-Libi, also known as Ibrahim Tantouche, who set up two Al Qaeda financing fronts – the Afghan Support Committee and the Revival of Islamic Heritage Society. Both operated as charities for orphans. In reality, the orphans were either dead or nonexistent.

As I point out in my book, terrorist financing can be simple or sophisticated. An example of the simple occurred on 25 April 2001 when Mohamed Suleman Vaid was arrested with his wife while attempting to smuggle US$130 000 in local currency across the border with Eswatini. The ensuing police investigation found that he had made this trip 150 times in the previous 18 months, and that there may have been connections to Al Qaeda via a Lebanese businessman.

A more sophisticated example came to light in 2010 following a forensic investigation by South Africa’s Department of Trade and Industry. This showed the convergence of corruption, criminality and terrorism. It took advantage of the corruption occurring within South Africa’s Companies and Intellectual Properties Registration Office.

The case involved tax fraud, money laundering, racketeering, organised crime, fraud and siphoning off millions of rands to fund international terrorism. One Pakistani suspect who is now in custody, Aliraza Syed Naqvi, specialised in cloning legitimate companies by registering a fake company with the same name as a legitimate company and its own bank account. Monies meant for the legitimate businesses were then diverted to the fake one.

The forensic audit estimated that up to 285 000 fake or dubious companies were created in this way. This scheme would never have occurred had it not been for corruption within the company registration office itself. The report identified 60 of its officials as being involved in such suspicious activities.

In this context, the US blacklisting of companies and individuals comes as no surprise. What South Africa needs to do is to implement the Financial Action Task Force recommendations completely and ensure compliance.

Given the high level of corruption within the ruling party, this will be not be easy. But it needs to be done to deter terrorist financiers and ensure the credibility of the government.

The country has signed and ratified the necessary counter-terrorism legislation. It is now time to walk the talk. Government needs to work with business, especially banks, to ensure early warning systems are in place.

The judicial system needs to be empowered to develop the necessary specialised capacity to ensure speedy convictions. Finally, the country needs to work with global partners to aggressively respond to this threat.