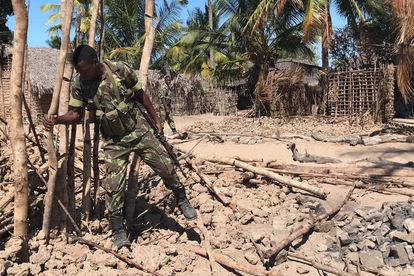 Islamist militants have devastated villages in Cabo Delgado province in Mozambique over the past three years. Photo: AFP/SCANPIX

Islamist militants have devastated villages in Cabo Delgado province in Mozambique over the past three years. Photo: AFP/SCANPIX

President Cyril Ramaphosa will reportedly call an urgent meeting as the stand-off between soldiers and Isis-linked militants continue in Mozambique.

This follows after Islamist militants from the al-Shabaab seized Palma in the Cabo Delgado province in northern Mozambique. Several people were killed near a huge gas project involving France’s Total, including one South African.

Militants raided the town of Palma on Wednesday, 24 March 2021, and close to 200 people, including foreign workers, were evacuated from a hotel where they had sought refuge.

At the time, local media reported that at least seven workers were killed during the ambush, including one South African. Many more are still unaccounted for, and no group has claimed responsibility for the attack yet.

On Saturday, military sources told AFP that fighting is still underway between government forces and the militants. At the same time, Human Rights Watch reports that “Al-Shabab fighters fired indiscriminately at people and buildings”.

On Friday, the attack against foreign nationals continued. An official from a private security firm told AFP that around 80 people were taken away from the hotel in military trucks on Friday, but some of the vehicles were ambushed.

“The 17-car convoy with people rescued from Amarula [hotel] was attacked soon after it left. Some have been killed, but many managed to escape. At first, it was thought they had been killed […] They were around 100 people”.

Those remaining in the hotel went to nearby military barracks on the beachfront and were ferried out on boats to an undisclosed location, the source said.

On Saturday, the Department of International Relations and Cooperation (DIRCO) said the South African government will now be sending additional staff to “locate, identify and respond” to other South Africans still trapped in the region.

“It is with grave concern to note that South Africans were also affected by these attacks. In this regard, South Africa, through its Mission in Maputo, is working with the local authorities on verifications, as well as providing the necessary consular services.”

In addition, DIRCO said “South Africa stands ready to work with the government of Mozambique in pursuit of lasting peace and stability”.

At the time of publishing, the village of Palma remains without communications, and efforts continue to establish contact with the remaining foreign workers.

Mozambique (Palma)
1) Was the assault in reply to the Total press release? No – the attack showed meticulous planning, which makes a prompt reaction decidedly implausible. pic.twitter.com/j9LhX2T3Bt

2) The US designations coupled with increased discontent against security forces implicated in unfair food distribution offered a convenient juncture for a high-impact hit.
Refer to: @ACLEDINFO weekly: https://t.co/ufGfAc0MXT pic.twitter.com/LhbHuEgW6u