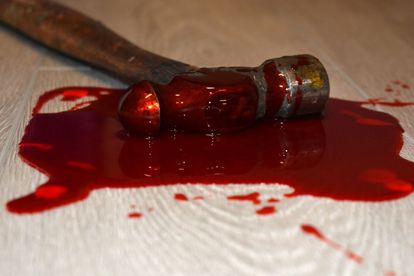 Talk about INSTANT KARMA! A son who allegedly bludgeoned his 72-year-old mother to death with a HAMMER was killed in a pedestrian accident while fleeing the scene.

ELDERLY MOTHER WAS REPEATEDLY HIT WITH A HAMMER ON THE HEAD

According to police spokesperson Colonel Priscilla Naidu the murder – that sounds like something out of a horror movie script played out in Gqeberha on Monday morning.

“A 26-year-old son allegedly bludgeoned his 72-year-old mother to death during the early hours of this Monday morning in Mondile Street in Kwanobuhle,” Naidu said.

She added that according to police information, it is alleged that at about 02:00, Nozipho Tshem was sleeping in the living room of her deceased daughter’s house when her son entered the room.

‘THERE WAS A COMMOTION BETWEEN THE TWO OF THEM’

“It is further alleged that there was a commotion between the two of them. Tshem was repeatedly assaulted on her head with a hammer.”

The mother died on the scene as a result of injuries sustained in the attack. Her son fled the scene.

The family members went to the police station and reported the incident. The motive for the brutal attack and murder is not yet known. A murder case was opened.

“While police were still at the scene, there was a complaint of culpable homicide in Matanzima Street (Kwanobuhle main Road). It is alleged that at about 04:30, the driver of a VW Polo reported at the police station and informed police that he had knocked a person.”

Naidu said when police arrived at the scene, they found a man lying in the road. He died before receiving any medical attention.

WHILE FLEEING THE SON WAS KILLED IN PEDESTRIAN ACCIDENT

The man was identified as Siya Tshem, the son and the suspect in the murder of his mother Nozipho Tshem.

A case of culpable homicide is under investigation.

“Both Nozipho Tshem and her son, Siya Tshem resided in Cape Town and were attending the funeral of her daughter earlier this month.”

ALSO READ:Two men killed in a hail of bullets near Inanda in a drive-by shooting