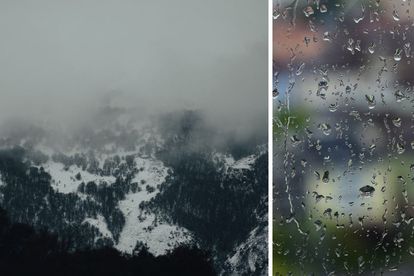 Snowy, cold and rainy weekend is expected for parts of SA – find out if you will be affected

Snowy, cold and rainy weekend is expected for parts of SA – find out if you will be affected

Get out those blankets, the cold weather is not over! Several parts of South Africa will most likely experience snowfall, cold weather, and thundershowers this coming weekend.

WILL YOU BE AFFECTED BY THE EXPECTED SNOWY, COLD AND RAINY WEATHER?

Let’s look at the expected cold front. According to the South African Weather Service (SAWS), a cold front is expected to move in along the south-western coast of the country on Friday.

The Western Cape will not only be affected by the cold front but also by the thundershowers.

According to reports on social media, rainfall started on Friday morning in Cape Town.

A COLD FRONT MOVING IN ON FRIDAY

Light snowfall is expected over the following areas:

LIGHT SNOWFALL IS EXPECTED OVER THE HIGH-LYING AREAS

Thundershowers are also expected over the central part of the country.

See the image below:

Meanwhile a warning were issued for damaging winds and waves on Friday for these areas:

HERE ARE THE TOP FIVE PLACES IN SA TO GO HUNT FOR SNOW IN JULY:

This comes after several parts of South Africa had snowfall last month. The following areas had confirmed snowfall:

Here is where snow was been confirmed last month: