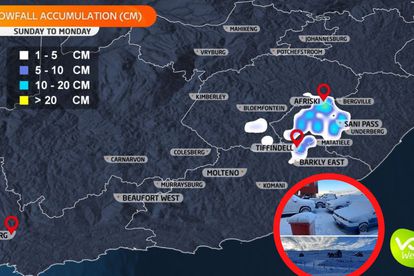 SNOWFALL of up to 20cm on Monday in parts of SA – here is the latest Photo: Vox Weather/SnowReport

SNOWFALL of up to 20cm on Monday in parts of SA – here is the latest Photo: Vox Weather/SnowReport

Snowfall of between 5- 20cm is expected for TONIGHT into Monday in parts of South Africa.

LIGHT SNOWFALL IS EXPECTED ON THE MOUNTAIN PEAKS

According to Vox Weather, temperatures will drop low enough for light snowfall on the mountain peaks of Sani Pass, Drakensberg, and Lesotho.

“Sunday overnight into Monday, you can expect snow over Lesotho and over the Drakensberg.”

Meanwhile, rain is set to continue along the South Coast on Sunday.

It furthermore warned that the accumulation of snow might result in isolated loss of vulnerable livestock and snowmelt, resulting in slippery driving conditions.

This comes after heavy snowfall was reported recently in several parts of South Africa.

Snowfall was confirmed last week on the peaks of the mountains in Barley East, on the Sani Mountain Pass, and in Lesotho.