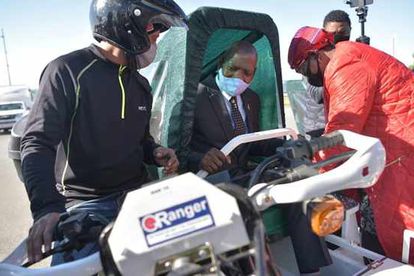 Health Minister Dr Zweli Mkhize inspects a motorcycle ambulance at the launch of the scooter project in the Eastern Cape. Picture: EC Department of Health

Health Minister Dr Zweli Mkhize inspects a motorcycle ambulance at the launch of the scooter project in the Eastern Cape. Picture: EC Department of Health

The Special Tribunal ordered that the department’s decision to award a tender to Fabkomp Pty Ltd to deliver 100 scooter ambulances at a hefty cost of R10 148 750 be reviewed and set aside. The order was handed down on Friday 28 May.

Special Investigating Unit (SIU) spokesperson, Kaizer Kganyago said that in light of the department “irregularly” awarding the contract to service providers, the SIU had instituted civil proceedings in the Special Tribunal last year to interdict the department from executing the contract and making any payment based on it.

“The Special Tribunal granted SIU the interdict and interdicted the department from making any payments to the supplier and from accepting delivery of any goods from the supplier, pending the finalisation of review proceedings to challenge the validity of the award and resulting contract,” Kganyago said.

Kganyago said the process was allegedly in contravention of Section 217 of the Constitution, which demands that public procurement should be “fair, transparent and competitive”.

“The SIU investigation revealed that the Fabkomp tender failed to satisfy all the requirements for compliance and functionality,” he said.

He said despite this, Fabkomp had been recommended as having scored 100% in all the set evaluation criteria.

“The SIU made two referrals relating to the MEC and the former superintendent general, which recommended administrative action and disciplinary action respectively. This relates to their involvement in the procurement of scooter ambulances,” he said. The referrals were made to Premier Oscar Mabuyane on 1 February and supplemented on 12 February 2021.

Mabuyane relieved Health MEC Sindiswa Gomba from her duties on 18 February 2021 and committed to subject the former superintendent general to a disciplinary inquiry.

“In line with SIU Act 74 of 1996, the SIU referred evidence pointing to criminality to the National Prosecuting Authority (NPA) and the Hawks for further action,” he said.

Fraud and corruption allegations may be reported via the following platforms: siu@whistleblowing.co.za / Hotline: 0800 037 774