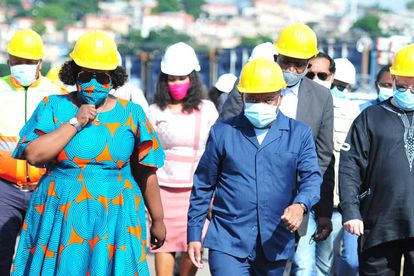 Kohler-Barnard, who opened a criminal case against Zikalala at the Clairwood Police Station on Monday, has alleged that the KZN premier flouted lockdown regulations by hosting a public rally under the banner of Freedom Day celebrations.

According to the complaint, Zikalala contravened the Disaster Management Act when he sanctioned a social gathering at Clairwood Hospital. The event, as retold by Kohler-Barnard, involved nurses and essential workers being pulled from their duties to attend Zikalala’s address.

‘A stage, sound equipment, a long programme of events…’

While the KZN government has vehemently refuted Kohler-Barnard’s claims, labelling the merits of the criminal charge as “fake news”, the DA’s Shadow Minister of State Security added that she had tangible evidence to support the case, saying:

“There was a stage, sound equipment, a long programme of events with speakers…of which I have photographs, film footage, copies and witnesses. The media were also invited via a press release. Hardly fake news.”

The allegations levelled against Zikalala come just weeks after Communications Minister Stella Ndabeni-Abrahams was suspended from duty and fined for contravening the lockdown regulations.

During his Freedom Day address, President Cyril Ramaphosa noted that while the country continued to languish under the heavy load of lockdown, cooperation and adherence to the regulations would ensure social celebrations in the coming years.

The president’s statement, which was broadcast to the nation, coincided with Zikalala’s contentious visit to Clairwood Hospital.

While it’s not clear whether the KZN government intends to lay counter-charges against Kohler-Barnard for “spreading fake news” — a crime punishable by law under the Disaster Management Act —  Zikalala has elaborated on his ‘site inspection’, professing his innocence.

In response to the claims, the KZN government issued a statement of its own on Monday evening, arguing that Zikalala was merely performing his essential duties as provincial premier; duties which included an “inspection in loco” and the delivery of Personal Protective Equipment (PPE) to hospital staff. The statement added:

“Premier Zikalala utilized the occasion to appreciate and motivate the frontline staff who are manning the forward trenches in the fight against the spread of COVID-19.

This was not a gathering as contemplated in the lockdown regulations but an ongoing routine work to monitor the state of preparedness by the province to respond to COVID-19.”

In closing the statement, the KZN government called on citizens to refrain from “falling for fake news”, reminding the public and, ostensibly, Kohler-Barnard, that “disseminating fake news is a violation of the regulations.”