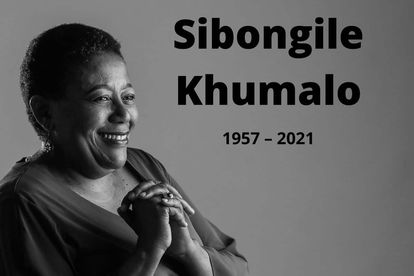 January isn’t a good month. We said goodbye to Jonas Gwangwa less than a week ago (incidentally, the same day which claimed Oliver Mtukudzi in 2019 and Hugh Masekela in 2018. Now we’re saying goodbye to Sibongile Khumalo.

Eyewitness News confirmed that the legendary jazz and opera musician passed away early Thursday morning, 28 January 2021 at the age of 63. The cause of death was not revealed.

The internationally acclaimed singer was born in Orlando West, Soweto in 1957. She was regarded as one of the greatest of our time; her singing talents ranging from opera and jazz to choral music and musical theatre.

Khumalo rose to fame in 1993 when she won the Standard Bank Young Artist Award at the Grahamstown Arts Festival. She collected awards and acknowledgements throughout her career, the most prestigious being the Silver Order of Ikhamanga in 2008.

The internationally revered artist has been lauded as one of the great singing talents of her time and has inspired the creation of new music by South African composers, both in the classical, opera as well as jazz genres.

Apart from prestigious appearances such as performing for late President Nelson Mandela on his 75th birthday or singing the South African and New Zealand national anthems during the World Cup Rugby Final in 1995 and lending her voice to the 1994 inauguration, Khumalo also enchanted audiences the world over.

Khumalo performed with the London Philharmonic Orchestra twice in the early nineties and sang Handel’s Messiah with Lord Yehudi Menuhin in 1995. Three years prior, she won over audiences with her performances of “The 3 Faces of Sibongile Khumalo”.

The singer, who once said white Carnations are her favourite flowers, was just as comfortable with performing via live stream during the COVID-19 pandemic as she was singing on a stage in front of thousands.