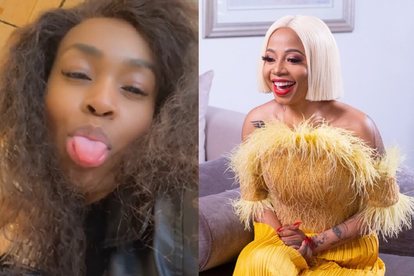 State witness in the Senzo Meyiwa murder trial, Tumelo Madlala, has revealed that the goalkeeper’s wife Mandisa and then-girlfriend Kelly Khumalo fought at Botshelong Hospital where he was rushed to following the shooting.

Madlala told the North Gauteng High Court on Wednesday, 14 September as he continued with his testimony.

On Tuesday, court proceedings were halted as Tumelo Madlala was overcome by emotions while on the witness stand, however, on Wednesday he looked a little composed.

The late goalkeeper’s friend then told the court the sequence of events after locating Senzo on the floor between a couch and TV inside Kelly Khumalo’s home.

Madlala said the house was fully packed with neighbours following the shooting. He added that they (along with the neighbours) tried to lift Meyiwa up but his body was heavy, however, they managed to get him to his own car which was parked out.

Kelly was reportedly driving while her sister, Zandie, Senzo’s brother-in-law Mthokozisi Thwala and Tumelo accompanied her to Botshelong Hospital.

“Upon our arrival, Senzo was taken by nurses and they waited on the benches. After a while a nurse appeared with a picture of an x-ray and asked for an elder. Kelly’s mother (MaKhumalo) then went. She came back crying and told us Senzo was no more,” he explained.

Tumelo said they then asked to see Senzo for the first time after he was declared dead and they were allowed but others did not want to go back when he requested to see him for the second time.

“I went to see him for the second time and Kelly followed me. When we got there he was lying on a stretcher facing upwards and I kissed him on his forehead while Kelly took his watch off and we left the room,” he said.

The witness further revealed that Senzo’s wife, Mandisa, was also at the hospital however he isn’t sure when exactly she arrived and who she was with.

“It became very full at the hospital, Orlando Pirates soccer players also arrived. It became chaotic by the glass doors of the hospital. I think Mandisa and Kelly had an altercation.

“I then saw hair (which he described as braids) on the floor. I am not sure whether it was Mandisa or her friends, but there was a fight and I saw hair.”

Madlala also told the court that he does not remember the exact day but while they were in Mulberton, music producer Sello Chicco Twala visited them and spoke to Kelly.

“I heard him asking Kelly if she does not want to go to a holiday overseas,” he told the court.