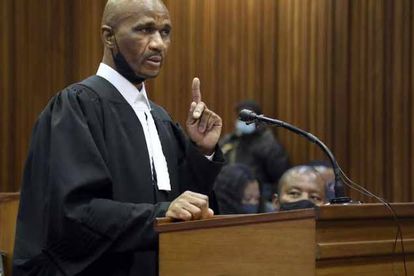 Advocate Malesela Teffo has withdrawn as legal counsel for accused 1-4 in the Senzo Meyiwa murder trial because of alleged harassment from the State and the court.

Teffo told the Pretoria High Court on Tuesday, 12 July, that he had already consulted with his clients and they came into an agreement that he should indeed quit the case.

Advocate Teffo said he can no longer be in court because he is harassed and humiliated by the State and the court.

“I would like to inform the honourable court that I will no longer be able to proceed based on the harassment that I am receiving from the State and the court,” he told the court.

“What is happening here is heartbreaking. The justice system in this country is becoming a circus..my clients are being prosecuted for sins they never committed. I cannot be part of this. Each time I raise an issue for accused 1 – 4 Judge Maumela cannot take a decision but let it be another one who raises something he is able to take a decision,” Teffo said.

Teffo said he is now going to pay full attention to case 375 that he was appointed by Sifiso Meyiwa to be a watching brief on.

The Pretoria High Court convened on Tuesday to hear Teffo’s arguments about the jurisdiction of the case, instead, he asked for the charges against accused 1 – 4 to be dropped.

Presiding Judge, Tshifhiwa Maumela, said accused 1 – 4 have a right to legal representation which is enshrined in the Constitution.

Maumela said necessary arrangements should be made for accused 1 – 4 to have legal representation by 2 August 2022 when the trial resumes should they require that.

Judge Maumela and Adv Teffo have had a number of clashes and sharp words for each other caught on camera several times during the trial.

Teffo once accused Maumela of treating him like a naughty boy. He said whenever he has to make a humble submission on behalf of his clients he is told to sit down like he is a naughty boy.