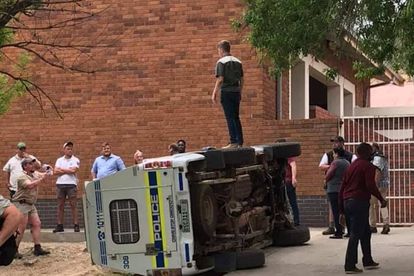 Framers in the Western Cape have been assisted with a crime dashboard to report incidents. Photo: @KoepelStereo / Twitter

Framers in the Western Cape have been assisted with a crime dashboard to report incidents. Photo: @KoepelStereo / Twitter

The South African Human Rights Commission (Sahrc) is appealing for calm in the Free State town of Senekal where Economic Freedom Fighters (EFF) supporters, Afriforum and farmers are gathering on Friday 16 October 2020. A mass gathering with a heavy police presence is underway in Senekal as two suspects, accused of murdering Farm Manager Brendin Horner, are expected to appear in court.

On 6 October, violent protests ensued outside the Senekal Magistrate’s Court where the two suspects made their first appearance. According to the Police Ministry, court property was damaged and a police vehicle was overturned. As reported, those who protested included farmers. One man, 52-years-old, was arrested shortly after the protest and was accused of public violence, malicious damage to property and according to the National Prosecuting Authority, also terrorism and attempted murder.

SAHRC CALLS ON ALL INVOLVED IN SENEKAL PROTEST TO EXERCISE CALM

With reports of the South African Police Service (SAPS) being present in full-force, and “anecdotal threats of a willingness for violent confrontation coming from various sources”, the SAHRC called on all involved in the Senekal protest to exercise calm.

“The Commission demands that the constitutional right to protest be exercised within the ambit of the Constitution and the law. Thus all participants in protest action must exercise this right unarmed and peacefully,” it said in a statement.

“The Commission insists that the heightened tensions based on race and social status are of no benefit to the social cohesion that South Africa’s peace and stability are dependent on,” it added.

The Sahrc said the push for confrontation with the potential for violence, damage to property and even threats to lives accentuates polarisation which is contrary to fostering South Africa as a constitutional democracy where all are free, equal and are treated with dignity.

“We should all work towards securing reconciliation between farm dwellers and farmers, farmers and the SAPS and to restore trust in the law enforcement agencies,” it said.

The Commission has thus asked for peace and for communities to allow the justice system and legal processes to run its course, unfettered in Senekal.

“A peaceful, prosperous nation is dependent on an efficient justice system, which operates independently of community sentiments. Violence and damage to property will not aid in bringing justice in the name of Mr Horner, or any other person who has lost their life to crime,” it added.