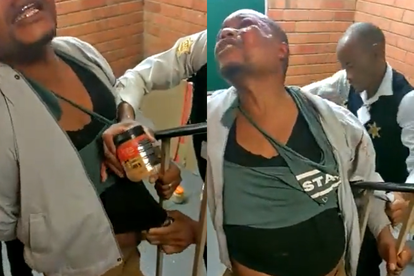 Security guards were filmed while lashing a man who allegedly stole peanut butter. Screenshots via Twitter.

Security guards were filmed while lashing a man who allegedly stole peanut butter. Screenshots via Twitter.

The Private Security Industry Regulatory Authority (PSIRA) says it is investigating an incident where security guards were filmed lashing a man who allegedly stole peanut butter..

In the 27 second video which has since gone viral on social media, a man allegedly stole different brands of peanut butter and hid them in his body and a security guard can be seen lashing him.

In the video the alleged peanut butter thief who is already scarred in his face and has blood can be heard asking for forgiveness as one of the guards continues lashing him. The second security guard is holding the alleged thief’s arm so that the one giving out the lashes is not disturbed.

“I am employed, I can even give you my work number, I will pay, I will pay. I am really sorry, please forgive me,” the alleged thief screams in agony.

ALSO READ: Couple found dead in their bed after adjoining flat is fumigated

In response to the viral video, PSIRA said it has identified which security company the officers work for and it is investigating the incident.

Former Economic Freedom Fighters (EFF) General Secretary and attorney Godrich Gardee said the company which employed the two security guards can be held liable for the pain inflicted on the alleged thief and they (the two men) can be criminally charged.

“This is assault and the company employing these security guards can be held vicariously liable for the pain and security guards criminally charged. The victim needs to be assisted by Human Rights Commission or Legal Aid board at no cost,” he said.