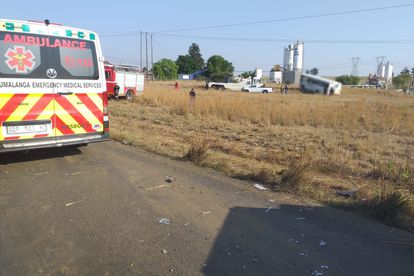 One person was killed and 59 were injured in a multivehicle crash in Secunda, Mpumalanga on Monday, 26 September. Photo: ER24

One person was killed and 59 were injured in a multivehicle crash in Secunda, Mpumalanga on Monday, 26 September. Photo: ER24

Dozens of people were injured in an accident involving a truck, bus and multiple other vehicles in Secunda, Mpumalanga on Monday morning, 26 September.

AT LEAST ONE KILLED IN SECUNDA CRASH

A spokesperson for paramedic service ER24 said the accident occurred along Graceland Road outside Secunda early on Monday morning.

Upon arrival at the scene, ER24 and other first responders found a truck on its side, partially off the road, and a bus a distance away in a veld. Other vehicles involved in the crash were parked across the road.

“Local authorities began to close off the road while emergency services set up a triage area.

“On assessment, medics found four people in critical condition while more than fifty others had sustained minor to moderate injuries,” said ER24.

The injured patients were treated at the scene and those critically injured were provided with advanced life support before being transported to a hospital for treatment.

“It is understood that one critically injured patient succumbed to their injuries upon arrival at a hospital.