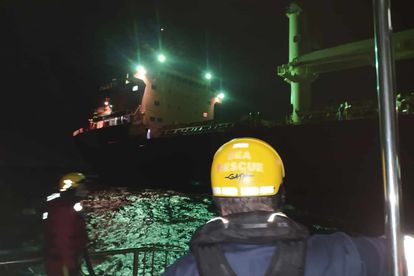 The National Sea Rescue Institute (NSRI) has come to the aid of an injured seaman on a ship steaming off the coast of Durban.

According to the NSRI, the sailor, who is from the Maldives, sustained serious injuries while carrying out routine work on the bulk carrier.

The master of the vessel reported that he was being stabilised in the ship’s medical room, but required urgent attention and hospitalisation.

The NSRI’s Durban duty crew, along with Netcare 911 medical personnel, were activated and the rescue craft Alick Rennie put to sea, accompanied by paramedics.

Four nautical miles off the Port of Durban breakwater, the Alick Rennie made a night rendezvous with the bulk carrier in treacherous conditions.

“On arrival on the scene, in rough sea conditions with a 3m swell running, a Netcare 911 rescue paramedic and an NSRI rescue swimmer were transferred onto the vessel and they took over care of the patient from the ship’s medical crew,” an NSRI spokesperson said.

“The patient, in a stable condition, was secured into a Stokes basket stretcher and he was transferred onto our sea rescue craft followed by the two rescue personnel.

“In the care of the rescue paramedics, the patient was brought to our NSRI Durban sea rescue station and he has been transported to hospital by Netcare 911 ambulance for further medical care.”

In September the Alick Rennie was called upon for a similar mission and rendezvoused with a cargo ship approximately nine nautical miles offshore of the Port of Durban in 20 to 25-knot north-easterly winds and choppy sea conditions.

The patient, a 34-year-old crewman from the Ukraine who was in a stable condition, was transferred onto the NSRI sea rescue craft and taken into the care of the rescue paramedic.

On returning to the NSRI Durban sea rescue station, the patient was transported to hospital for further care.