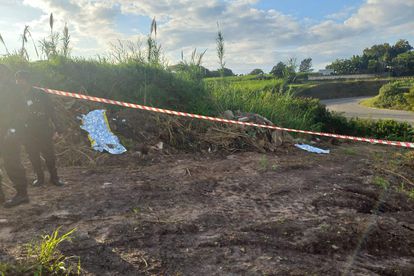 Two scrap collectors were apprehended by private security guards and allegedly beaten to death after they were suspected of stealing a bus engine on Thursday in Canelands.

The two males were declared dead on the scene due to the severity of their injuries.

Both had suffered extensive head, facial and bodily injuries and were declared deceased.

Reaction Officers then proceeded to Drift Road, on the scene.

Reaction officers said a security officer on the premises explained that he was the night guard.

When he reported for duty on Wednesday, two day shift guards had informed him that they had apprehended two scrap collectors after they stole a bus engine that was stored on the premises.

“The engine was carried by the three suspects to a local scrap yard. A witness informed the day guards that the suspects were seen carrying/dragging the engine and walking towards a scrap yard known to purchase metal.

“The night guard further explained that his colleagues recovered the engine and walked the three suspects back to the block yard  they were employed privately to guard. They then began assaulting the suspects. One suspect managed to break free and fled. The remaining two were severely beaten. The beatings continued for several hours and when the day guards left the premises the night guard called for a State Ambulance.”

By daybreak, the ambulance had not arrived. When the management of the blockyard were made aware of the situation, they then contacted the RUSA Operations Center for assistance

Both suspects/Security Officers have reportedly fled the area. They are believed to be residing in Bergville in Northern Drakensberg.

Two cases of Murder are being investigated by SAPS.