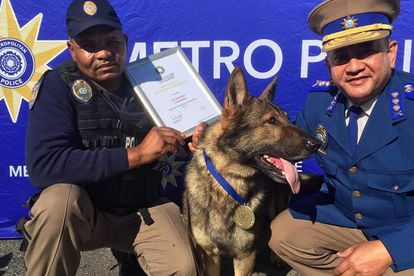 A beautiful Sable German Shepherd K9 police dog by the name of Savage has been awarded a service medal by the Metro Police for his stellar crime-fighting performance in the first half of 2019.

Savage has been with the Metro Police K9 Unit for nearly three years and is turning out to be a nightmare for drug dealers.

Along with his handler constable Mosuli Faku, the K9 police officer has been responsible for the confiscation of nearly R160 000 worth of narcotics and cash in just the first six months of this year.

Faku and Savage have been a team since the dog started active duty just less than three years ago and have proved to be a crime-fighting force to be reckoned with.

The Metro Police’s unit currently consists of 25 canines, 20 of whom are on active duty and specialising in the detection of narcotics, explosives, and copper.

Three are currently on training, one is breeding, and another one has been seconded to assist the Law Enforcement Metal Theft Unit.

“A number of our canines are new, and so officer Savage is setting a wonderful example for the rest of the team,” said Metro Police Chief Wayne Le Roux. “His performance in the first six months of this year has been noteworthy indeed, and has ranged from sniffing out drugs hidden in trees and even underground.

“Officer Savage is an asset to our efforts to curb the illicit drug trade, and we felt it appropriate to award him with a service medal in recognition of his efforts.”

“Our specialised units perform a very critical function, in particular, our canines. Over the years, drug dealers have become increasingly creative in hiding their wares, but our dogs are up to the task,” Le Roux added.

“They have enlightened their handlers with these finds, so now officers know how to adjust their search patterns when they conduct operations.

However, it isn’t just their crime-fighting abilities that makes these pups so useful to the police force.

“We are very proud of the work done by our K9 Unit, both during enforcement and also through their education and awareness outreaches.

“They have helped us develop strong bonds with communities, particularly in teaching children about the role of law enforcement, but they are also a criminal’s worst nightmare. It’s a perfect balance.”