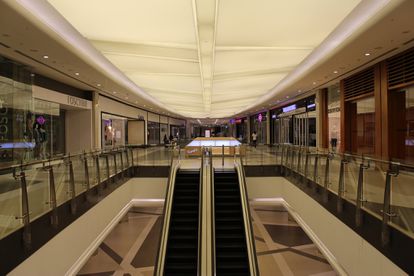 Officials at Sandton City Mall have confirmed that an ‘individual’ committed suicide inside their sprawling complex, just before 20:30 on Wednesday night. Several eyewitnesses described seeing a distressed woman, and some were unfortunate to witness the tragic plunge as it happened.

First responders rushed to the scene immediately, but the woman had succumbed to her injuries before she could be taken to hospital. Details remain sketchy at this point, and SAPS are continuing to investigate this morning.

In an official statement, Sandton City Mall expressed its ‘deepest condolences’ and shared its sympathies with the family of the deceased. They were also able to confirm that the woman was declared dead at the scene:

“Sandton City confirms that on 13 October 2021, at approximately 20:26 an individual jumped to their death. Emergency services responded to the scene immediately, but the individual has unfortunately been pronounced dead.”

“The South African Police Service arrived at the scene shortly afterwards, with an investigation now underway. Sandton City Management sends its deepest condolences to the family of the deceased.”

It’s understood that a video of the incident is circulating on social media, but out of respect for the victim, we will not be sharing it in this article. Several people inside Sandton City Mall at the time have been left traumatised:

Just witnessed something terrible and traumatising in Sandton City tonight. ????????????

It was confirmed on Thursday that the victim is, heartbreakingly, a 19-year-old matriculant. Management at the mall have also requested that anyone with video footage of the incident must refrain from sharing it online.