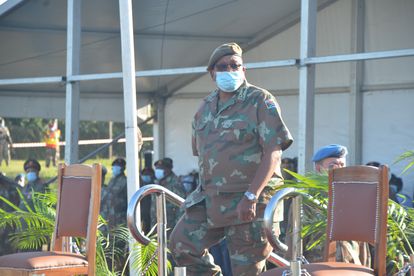 Ill discipline and drug abuse must be rooted out of the ranks of the SA National Defence Force (SANDF) so that the organisation’s reputation is not tarnished by a minority of poorly behaved soldiers.

This was the parting word from Chief SANDF General Solly Shoke at his Pass-Out Parade held at the SANDF base on the Bluff in Durban on Monday. The ceremonial event was attended by his successor Lieutenant General Rudzani Maphwanya and commanders from both the KZN and Eastern Cape region as well as the head of eThekwini Police Steve Middleton.

Shoke congratulated the troops for their peace keeping missions in Sudan, Burundi and the Democratic Republic of the Congo during his address but also highlighted the need to root out “a minority” of ill disciplined members.

He said the SANDF troops had “left an indelible print and touched the hearts of the people wherever you were” on the continent.

“You have also done exceptionally well interacting here in the the Republic of SA where you have been involved in the complex operations of fighting an enemy called Covid-19. Nobody wanted to venture into the streets to help our people. You were called on to assist the Department of Health and the police  to make sure that we save the lives of our people,” he said.

“There might have been mistakes here and there but overall you have done exceptionally well,” Sonke said, probably alluding to the reported citizen beatings by soldiers and the death of Alexander man, Collins Khosa, 41 after soldiers and metro police on lockdown duty beat him outside his home on  10April 2020. The SANDF suspended the soliders and later cleared them of being responsible for his death.

Shoke said the SANDF was a clear example of the success of the “rainbow nation” as members from the old SA Defence Force and uMkhonto we Sizwe had put aside their personal differences and politics to form a united force that worked in the best interests of the country.

However Shoke said there were “a few issues” he had to address.

“The problem of discipline…we have a few members in our midst who by their conduct damage our image, because there are some in our society who focus on the negative. You do so much good but it’s the one percent that people focus on. We also cannot ignore the use of drugs in our midst,” he said.

“We have to get rid of it. We are people who have weapons of war and therefore we should not allow people who abuse drugs to be in our midst, because drugs cause people to not think properly,” Shoke said.

He added that it was not business as usual for the SANDF as the force had to make the most of the “limited resources” it had been allocated, alluding to the R15 billion budget cut for defence in the 2 uMkhonto we Sizwe, the armed wing of the African National Congress on 30 September 1976. He was transferred to the SANDF on 27 April 1994.

Shoke was appointed Chief of the SANDF in 2011, the highest rank in the army.